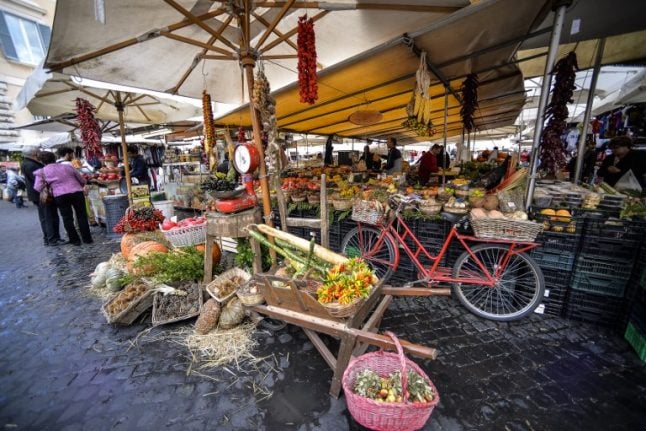 Biking to the market to get your fresh vegetables is part of life in Italy. Photo: Andreas Solaro/AFP

Italy is officially the world’s second healthiest country, narrowly beaten to the top spot by Spain.

That's according to the Bloomberg Healthiest Country Index, which ranks 169 economies according to factors that contribute to overall health.

There's no doubt that the legendary Mediterranean diet is a big factor in the ranking.

But is living in Italy really better for your health?

We put the question to our readers and were quickly inundated with stories of how a change in lifestyle after moving to Italy has helped people reach a healthy weight, feel more energetic, and even find relief from health problems. Almost everyone reported being at a healthier weight since making the move – despite many admitting to a weakness for pizza, pasta or gelato.

“I lost three stone in four months and couldn’t put weight on no matter how much I ate,” said Peter Barber in Campania. “Due to eating healthy and being active.”

Frederick Bee in Siracuse, Sicily, was one of many who reported accidental weight loss.“I lost 15 kilos in weight in my first six months without even trying,” he told us.

Jennifer Morgan in Florence wrote: “When I'm in the US, I'm underweight (sometimes severely) because of a poor appetite, and I never have the energy to do anything. Here, not only do I have a tremendous appetite (the food was the first thing I fell in love with here) but I am finally at a healthy weight!”

“I am also more active, always wanting to be outside doing something. I feel better in body, mind, and spirit whenever I am in Italy and that is ultimately why I decided to move here.”

Many agreed that this general feeling of wellbeing is one of the biggest benefits.

And the lifestyle even seems to alleviate health problems for many.

Vicki Comisso in Monopoli, Puglia, said: “My general health has improved while living in Italy. I sleep much better, have reduced inflammation – my fibromyalgia symptoms have gone away, blood pressure is lower and overall I feel better.”

And within three months of moving to Florence, Trisha Mehis said she “had lost 27 pounds and my blood sugars normalized. I had suffered from ulcerative colitis and experienced remission during this time.”

It might sound miraculous, but readers told us it's as simple as eating better and getting more exercise.

The more relaxed way of life and more time spent outdoors helps, too.

“It's easier to eat fresh produce because it's grown close by. Italians have made me much more aware of “genuine” food,” said Mary Judge in Puglia.

“Most of the food I buy has travelled less distance to the shop than I have and there is virtually no pollution here,” said Ed Foley in Abruzzo.

A lot of people cited extra virgin olive oil as the healthiest part of their diet, while others credited the amount of tomatoes they now eat and the increased amount of water they drink.

It’s the tomatoes, I’m certain of it. The lycopene in tomatoes is antioxidant /anti-cancer and they’re eaten *every day* in some form. How else do you explain being so healthy on a diet of refined carbs and dairy?! https://t.co/hdlrOkctWg

Many also said the friendliness of their neighbours added to a general sense of wellbeing.

“I know my neighbors and they look out for me, we look out for each other,” said Mary Judge. “Good friendships keep me happy and healthy.”

The more social way of life in Italy was seen as an important aspect, as well as the slower pace of life that allows people to spend more time cooking and enjoying meals.

But the Italian health service got some of the credit, too.

Italy's always in the top 3 countries worldwide for longevity and for overall health according to the World Health Organization. As a doctor practicing in Italy I'd say the explanation only takes four words: healthy lifestyle, universal healthcare.

“Regular healthcare and preventive medicine, a focus on being in shape, and not eating outside mealtimes,” are a few other important factors, according to Peter Luntz in Milan.

However, some of you pointed out aspects of life in Italy that are far from healthy, with pollution, smoking, heavy traffic and sugary breakfasts seen as the biggest Italian health hazards.

And while some readers reported feeling much less stressed here in Italy than they did in their home countries, others said they felt more stressed out than ever before thanks to “things not working as they should”, the famous bureaucracy, and their Italian in-laws.