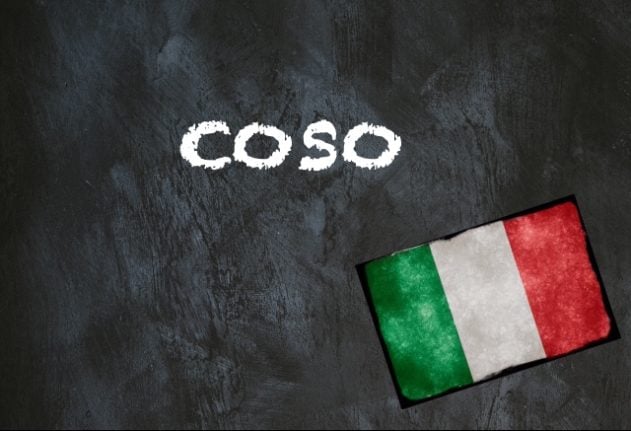 No, that isn’t a typo: we do mean coso and not cosa. The two are closely related but subtly different, as you’ll see.

Cosa, as you probably know already, means ‘thing’, ‘something’ or ‘anything’ – whether that’s a particular object, an abstract matter or something undefined.

Vuoi qualche cosa da mangiare?
Would you like something to eat?

Cosa hai fatto di bello oggi?
Did you do anything nice today?

You can use cosa for pretty much anything. But there’s a particular situation when you can say coso instead: when you want to be even less specific.

If cosa is ‘thing’, coso is like ‘thingy’ – it shows that you don’t know what to call whatever it is you’re referring to. And it goes for both objects and people, making it ‘whatchamacallit’ and ‘what’s-her-name’ all in one.

Come si chiama quel coso che si usa per i capelli?
What do you call that thingy you use on your hair?

Note that while cosa is feminine, coso is masculine. And while cosa is perfectly standard, coso is more colloquial: you generally use it only in spoken or informal Italian.

While our English words for unknown items (doodad? thingamabob? hoojamaflip?) may be more inventive, Italian goes one step further and turns the whole, er, thingy into a verb: cosare. It means ‘to perform an action you don’t know the name of’ – or if you like, ‘to thingummy’.

Just be warned that cosare isn’t widely used everywhere in Italy (it seems to be more common in the centre and north), and some people object to it as an ugly corruption. Though personally, I think it’s rather brilliant.