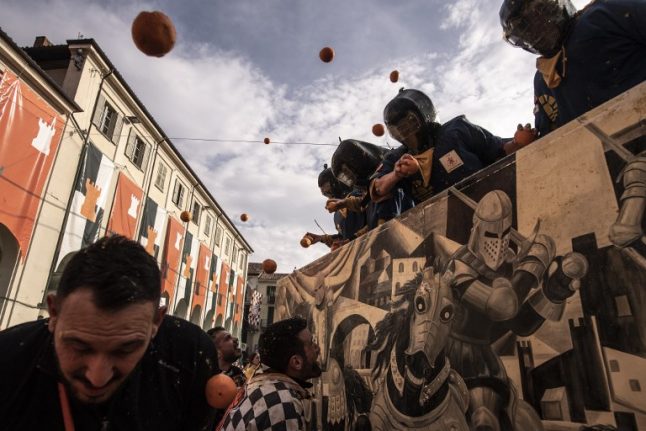 This year's Battle of the Oranges. Photo: Marco Bertorello/AFP

The three-day food fight in Ivrea, Piedmont has taken place each year since 1808, making 2019 the carnival's 211th edition.

Huge crowds descend on the city for the Battle of the Oranges, a messy fight believed to commemorate a revolt against the monarchy.

This year's festivities kicked off on Saturday and continue until Tuesday, March 5th, the day before Ash Wednesday and the Christian festival of Lent. According to legend, a 12th century rebellion began after a baron visited a peasant girl on the eve of her wedding, hoping to exercise the right medieval lords supposedly had to have sex with any women from the lower classes.

But the girl fought back, beheading the baron and marching around the town with his head, an action which sparked a peasant uprising. These days, the battle is recreated using fruit, and festival-goers or 'aranceri' (orange-throwers) are divided into teams.

Those on foot represent the commoners, split into nine teams with different emblems. Others, portraying the Napoleonic troops who used to rule the town, fight back from horse-drawn carts. People dressed up as the Mugnaia ('miller's daughter', the peasant girl who started the revolt), also called Violetta, and Napoleonic officers parade through the streets. Violetta hands out sweets and other small trinkets to those who have come to watch.

Huge stacks of crates filled with the citrus fruits line the streets to supply the participants with ammunition, while the carts are stocked with oranges too. It is not exactly clear why oranges are the fruit of choice, and in previous decades, beans or apples were used instead.

Each year, hundreds of thousands of kilograms of oranges are imported from Sicily to the north-western town. Spectators can choose to wear a red hat to mark themselves as a bystander (donning the hat also means you cannot throw any oranges yourself), or stay safe from flying pulp by sheltering behind the nets which are put up to protect Ivrea's buildings. Other rituals include a large bonfire, again symbolic of the revolt but also of the arrival of spring, as well as the musical and theatrical performances common to many Italian carnivals.