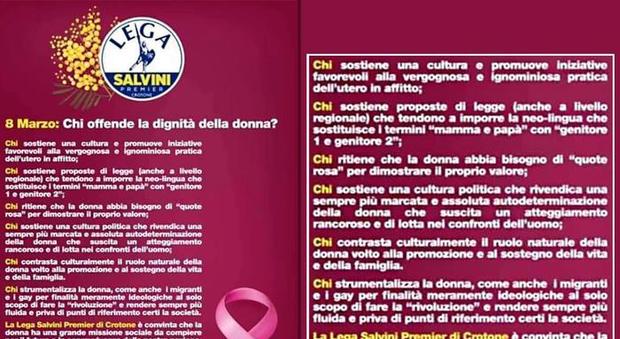 As well as managing to squeeze in attacks on same-sex couples, LGBT people and migrants, the leaflet railed against “self-determination” and said women have “a great social mission to accomplish for the future and the survival of the nation.”

Some people thought it had to be a joke, but unfortunately it wasn't. The leaflet was created by a local branch of Italy’s League party in Crotone, Calabria, to be handed out at a Women’s Day celebration in front of the town hall on Saturday. The six-point manifesto also attacked the concept of surrogate pregnancies and Italy’s so-called “pink quotas” – quotas introduced in 2015 that aim to improve equality in Italian workplaces.

And it voiced support for League leader Matteo Salvini’s campaign to put the words “mother and father” on Italian childrens’ identity cards.

The leaflet went on to claim that the “dignity of women” was offended by a “political culture that claims self-determination and arouses rancorous attitudes towards men.”

But a few of those “rancorous attitudes” were quickly aroused on the group’s Facebook page today when it shared an image of the leaflet online.

The post quickly attracted angry comments, with even the League’s followers apparently unimpressed.

“I had to read it six times to make sure it wasn’t a joke,” wrote one user.

“And the natural role of a man would be what?” asked another, “to hunt wild boar with a club?”

“This text offends the dignity of anthropologists, sociologists and human scientists who have been working for more than a hundred years to study society,” commented another. “This concept of the natural role has been outdated since the 50s.”

“But what do you know? Making propaganda is easier than studying.”

Female members of the Five Star Movement, the League’s government coalition partner, said in a group statement distancing themselves from the leaflet that it was “shocking” and “takes us back decades.”

Maria Edera Spadoni, vice-president of the Chamber, said the leaflet contained “delusional concepts, out of time, backwards, which are not included in the government contract.” And oppositon senator Alessia Rotta of the Democratic Party described the flyer as “a list of clichés and insults as well as an attempt to relegate women to a reproductive role.”

Rotta added in her Facebook post that “the only horrifying laws are those presented by the League, such as the Pillon bill.”

She was referring to a divorce bill proposed by League senator Simone Pillon which risks turning the clock back 50 years for women, children and survivors of domestic abuse, as it aims to change the rules on the separation of couples and the custody of children.

Rather than distancing himself from the leaflet, League leader Matteo Salvini today told press he didn’t know about it, adding “I don’t agree with some of the contents.”

The current Italian government is only 17 percent female – compared with the 31 percent in the last cabinet – representing a step backwards for women in Italian politics.

When it comes to gender equality, reports show Italy lags far behind its Northern European neighbours, who lead the index worldwide.

Women have more equality in Mexico, Kazakhstan, Zimbabwe or Bangladesh than in Italy, according to the World Economic Forum's 2017 report on the global gender gap.