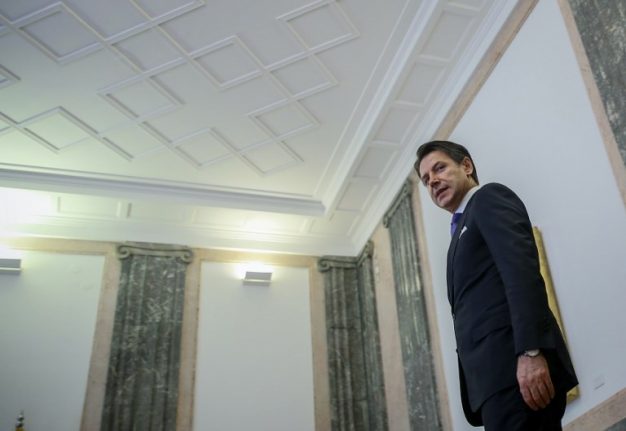 Italian Prime Minister Giuseppe Conte. Photo: OLIVER BUNIC / AFP
Conte, a trained lawyer, helped draft a legal document late Friday to find a way out of the conflict between coalition partners the far-right League and the anti-establishment Five Star movement (M5S), said Italian daily Corriere della Sera.
Tenders to pursue work on the Franco-Italian project have to be launched on Monday to avoid the loss of 300 million euros of European Commission funding.  But while the leader of the League, Interior Minister Matteo Salvini has been a staunch supporter of the project, M5S chief Luigi Di Maio opposes it.
Conte's legal letter went to TELT, the Franco-Italian company in charge of the project, to maintain the preliminary tendering process.
Italian papers described Conte's solution as a piece of “legal acrobacy” — it keeps the project and the European funding on track without making a final decision on it.
Conte's position has been closer to that taken by M5S. In comments last week, he expressed doubts about the project. His compromise gives both France and Italy six months to take another look at the project before making a definitive commitment.
To that end, he said, he had written to French President Emmanuel Macron and to the head of the European Commission Jean-Claude Juncker, to seek meeting in which they could arrive at a joint decision.
Salvini and De Maio have made it clear that they remain committed to their respective positions, for and against the project. Italy's opposition left meanwhile, denounced what they said was the government's inability to make a decision.
“Conte, Salvini and Di Maio are destroying Italy's credibility,” said Graziano Delrio, of the Democratic Party and a former transport minister.
Url copied to clipboard!