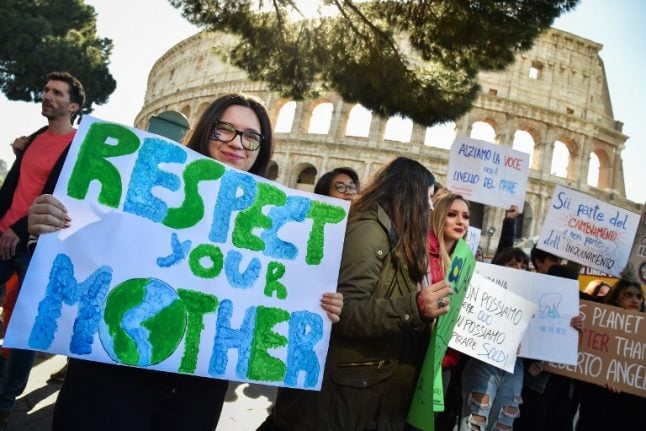 With 235 events planned on March 15th, Italy was preparing to hold more demonstrations than any of the other 130 countries taking part in the so-called Fridays for Future movement, inspired by Swedish teenage activist and Nobel Peace Prize nominee Greta Thunberg.

In Rome, students from elementary schools up to university were invited to down their books mid-morning and join a march past the Colosseum towards Piazza Venezia, where thousands were expected to gather for a series of speeches by young climate activists. “I went because I’m extremely passionate about the environment and sustainability in particular, and I try to make a lot of personal choices that reflect that value to me… but I thought it was also good to use my voice to speak to people that have a wider audience, like the government, and who have more control over big companies,” one attendee, 17-year-old Eveline, told The Local. “Italy is starting to import olives, because the climate is changing so much that it’s hard to grow olives. And considering we’re one of the biggest producers of olive oil, that's very worrying. So it’s having a big effect on our crops,” she said.

“And I just think that there’s really a lack of awareness in Italy, or at least there’s a lack of government action more than awareness.” “Unfortunately, even if all of us start riding bicycles to school or start eating less meat, I think a majority of pollution comes from major corporations,” said another striker, 16-year-old Dylan, who said he wanted to see big companies switch to renewable energy sources.

“I know in Rome we do the Sundays where certain cars can’t [drive in certain areas], but maybe we could do something on a greater scale – like making all public transportation green,” suggested Eveline. All photos from the Rome march by Andreas Solaro for AFP.

In Milan, students were heading for city hall where they planned a sit-in. The march was joined by Mayor Giuseppe Sala, who is one of nine mayors worldwide to have invited school children for talks on how their city can be made more sustainable.

“Thanks for what you're doing today, but start thinking already about what you'll do tomorrow,” Sala told the marchers.

“Milan is setting a great example for Italy and you should feel that responsibility. What happens here will influence our whole country.” “The reason I'm here today is because my most beautiful memories are in some way connected to nature, and to hear that this will all be ruined or may not even be here any more is just unacceptable,” high school student Zoe told The Local from the Milan march. “Finally we're the voice that will help people understand that things need to change,” one first-year environmental engineering student said. All photos from Milan by Rachael Martin for The Local.

Other demonstrations were planned in some 200 other Italian towns and cities, including Venice, Naples, Florence, Turin, Bologna and Genoa. Protesters in Turin. All photos by Marco Bertorello for AFP.

Climate protests were planned on Friday in almost two-thirds of the world's countries, according to Thunberg.

Starting in the autumn school term, she has spent each Friday outside the Swedish parliament in Stockholm, and ever since the first few days she has been joined by other students, teachers and others concerned about the climate.

“Seeing how many people were there I think it’s really going to make a difference,” said Eveline in Rome.

“I’d like to say [it will make a difference], but unfortunately there needs to be more. Usually these marches or strikes end up affecting the wrong people – for example, the public transport strikes in Rome ultimately hurt us more than the government. I asked some teachers and they were frustrated that we ended up leaving class.

“But otherwise I hope it does end up changing something.”