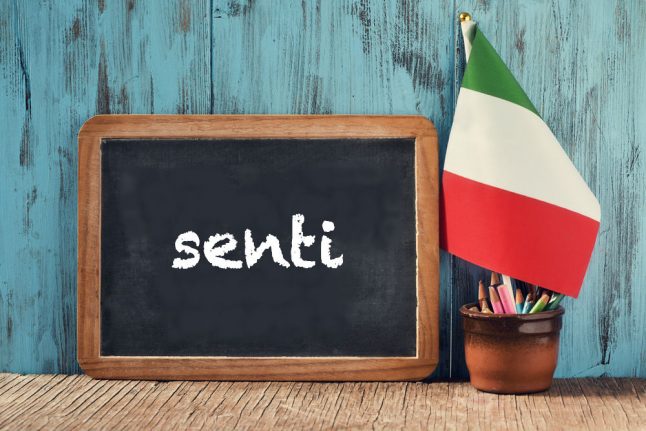 How do you get an Italian to listen to you?

If you have a tried and tested method we'd love to hear it, but in the meantime we can tell you roughly how to ask. Or rather, command.

Senti is the imperative form of sentire, the verb 'to hear' or 'to feel'. That makes it an instruction or an invitation – like 'listen'.

We should clarify that it's not necessarily what you say when you want everyone else to shut up and pay attention: that's more likely to be “zitto!” ('quiet!') or “ascolta[mi]!” ('listen [to me]!').

Senti is a (usually) different kind of 'listen': the kind you drop into a conversation with a friend when you want to signal you're about to get serious, that you're really getting to the crux or that you want to be frank.

In English we often swap 'listen' for 'hey' or 'look'. It might mean 'pay attention to this', but it also might just be something you say to make your sentence a bit less abrupt.

Senti, ne parliamo in privato.
Look, we'll talk about it in private.

Senti, mi presti la tua auto?
Hey, will you lend me your car?

Remember that senti is the second-person singular (the tu form), so if you're addressing more than one person at once (voi), you'll need to make it sentite.

And just like in English, sometimes things have to be heard to be believed. If someone says “Senti questa!” ('Just listen to this!'), it's usually with a tone of incredulity – like saying, 'can you believe this?'

Even worse is if someone responds to you with “Senti chi parla…” ('Listen who's talking', or as we'd say, 'Look who's talking'), implying that you're a fine one to hold whatever opinion it is you've just expressed.

Unless, of course, you're discussing the merits of 1980s rom coms.