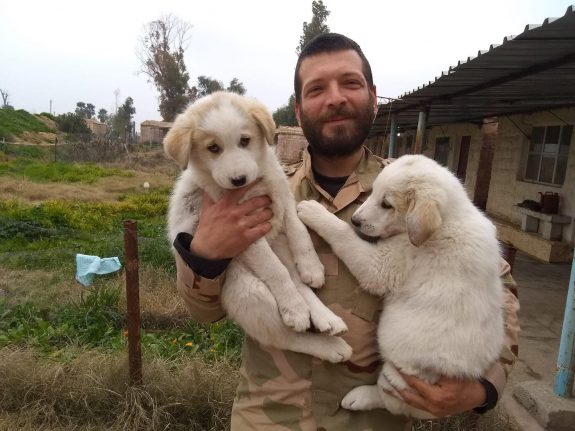 An image of slain fighter Lorenzo Orsetti, published on the Facebook page of friend Claudio Locatelli

Lorenzo Orsetti, 33, was killed in battle on Sunday as he fought diehard jihadists in the village of Baghouz, a spokesman for the US-backed Syrian Democratic Forces said.

“Two days ago… he was at the forefront of the fighting and he died in battle,” Mustefa Bali told AFP.

“He was a frontline fighter in the ranks of the People's Protection Units” or YPG, a Kurdish force spearheading the SDF, he said.

Orsetti even fought to defend the Kurdish enclave of Afrin in northwest Syria, before it was overrun by Turkish-backed Syrian rebels a year ago, he said.

Devastating to hear that Lorenzo “Orso” Orsetti from Florence, Italy was killed this morning in Baghouz during clashes with ISIS. He fought bravely in Afrin & had a number of close calls on the Deir ez-Zor front. He was a chef by trade, a dog lover, an intelligent & brave comrade pic.twitter.com/Y2UDMCg5Zj

IS published a photograph of the slain fighter and a snapshot of his healthcare card on its social media channels Monday, claiming to have killed him in Baghouz.

The YPG on Tuesday released a video of Orsetti, in which the Italian said he joined the Kurdish force of his own free will, knew the risks involved, and had no regrets.

Dressed in military uniform and with a weapon in his hand, he said he was in Syria mainly “because I believe in freedom – I'm an Anarchist – and I was tired of my life in… Western society”.

Orsetti's parents reportedly learned of his death via Italian news reports after his photo was published on the IS-linked Aamaq news channel and journalists began calling their home for comment.

Orsetti's father Alessandro told the press he and his wife were “devasted” but “very proud” of their son.

Orsetti had initially travelled to Syria in September 2017 as an observer but felt “increasingly involved”, his father said.

His body “is apparently still in a combat zone. We hope to be able to recover it as quickly as possible,” he said.

“Lorenzo once told us he'd love to be buried in Syria. We don't know what we'll do yet, but I think we'll respect his wishes”.

Davide Grasso, an Italian who fought with Orsetti in Syria in 2017, told presenters on the  political talk show Agorà that Orsetti was “truly exceptional – everyone fighting with him in Syria thought so.”

According to the daily Corriere della Sera, some 25 Italians have travelled to Syria since 2015 to fight alongside Kurdish forces, and three men and two women are still there.

Orsetti had left a “last testament” cited by Il Messagero and other newspapers and shared on Facebook by Grasso and the war correspondent Claudio Locatelli.

“I have no regrets. I died doing what I believed was right, defending the weak,” the letter reads.

“I am almost certain that I left with a smile on my lips. I couldn't have asked for better. Remember that every storm begins with a single drop. Try to be that drop.”