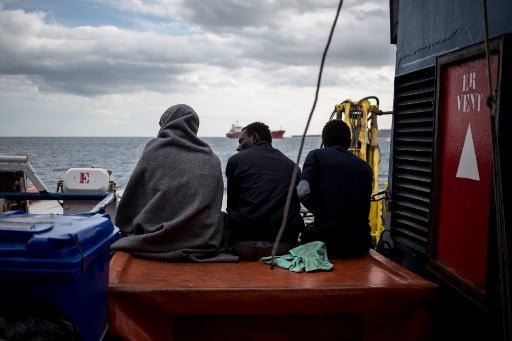 He said the Italian vessel Mare Jonio had not carried out a rescue operation but instead “aided illegal immigration”.

“They can be cared for, nourished, clothed, whatever you like, but they won't get permission from me to step foot in Italy.”

Salvini issued a directive on Monday saying ships rescuing people in areas of the Mediterranean under Libyan responsibility, during operations not coordinated by the command centre in Rome, have no right to use Italy as a port of safety.

Meanwhile Lampedusa mayor Totò Martello has said that the migrants are welcome on the island and he does not consider its ports closed.

“At sea there are no directives,” he told the news publication AdnKronos. “If there is a need and I ask to be let in, in short, you have to let me in. That’s all there is to it”.

As the debate raged over the ship's fate, the International Organization for Migration (IOM) said another dinghy with an unknown number of migrants on board had sunk off Libya, leaving 15 survivors.

The Mare Jonio, operated by the Mediterranea collective of aid groups, took shelter from bad weather off the island of Lampedusa early Tuesday, despite being ordered by Italy to maintain a distance from the coast and turn off its engine, according to its mission head and captain.

“We have people on board who are sick, I have to take them to a place of safety and there are two-metre high waves. I'm not turning off the engine,” Captain Pietro Marrone told the authorities, according to the Avvenire daily.

“The weather conditions were impossible. We had no other choice,” mission head Luca Casarini said.

The rescue ship #MareJonio of @RescueMed has reportedly come across a dinghy with approx. 50 people in distress. Rescue currently ongoing.

Despite a dangerously low SAR capacity in the #Mediterranean due to #Italy & #EU policy, people continue to risk their lives to seek safety. https://t.co/x7mpVVdX7u

“We are sailing under an Italian flag, they cannot forbid us to disembark,” he added, according to AGI news agency.

A 25-year-old with suspected pneumonia was evacuated to Lampedusa for medical attention.

Salvini, who heads up the far-right League, has repeatedly declared Italian ports closed to NGO rescue vessels, previously leaving several of them stranded at sea in a bid to force other European countries to take their share of asylum seekers.

Any infringement of international maritime or Italian law “can be read as a premeditated action to bring illegal immigrants to Italy and facilitate human trafficking”, he said.

On Tuesday he said the ministry was creating a commission of “experts and police” to ensure his directive – which lays down rules about rescues at sea –  was enacted.

“Italy must not give in to the blackmail of the ships run by social organisations and those who make themselves complicit in human trafficking,” he said in a tweet on Tuesday.

The Italian Refugee Council said it was “extremely concerned” over the directive, which “assumes that Libyan ports can be considered safe and that docking at Tunisian and Maltese ports is possible”.

“It takes no account of the dramatic reality,” council's director Mario Morcone said in a statement.

“We act as if the countries with which we share the Mediterranean were the Netherlands, Germany or Sweden. But this is clearly not the case,” he said.

As Italy's financial police boarded the Mare Jonio for an inspection, Deputy Prime Minister Luigi Di Maio confirmed the vessel had refused an order to switch off its engine.

He accused the ship's crew of “disobeying an order from the Libyan coast guard by taking on board the migrants”.

Salvini has gone so far as to call for the arrest of the commander of the ship and its head of mission, comparing his order to keep migrants in the Mediterranean out of Italian waters to a roadblock.

“If a citizen forces their way through a police road block they are arrested. I expect this to happen in this case,” he said on Tuesday morning.

Since Italy's populist government came to power last year and began a crackdown on rescue vessels, “we have seen an exponential increase in the number of deaths compared to the number of migrants landing,” the council said.

Some 152 people have died in 2019 so far, while 471 have reached land in the central Mediterranean, meaning one out of every three migrants trying to make the perilous crossing from North Africa are dying in the attempt.