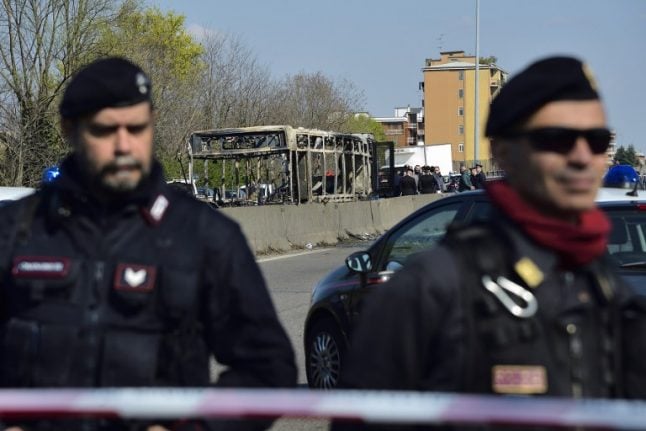 No one was seriously injured in the incident thanks to the interventions of Italy's carabinieri police force, who intercepted the vehicle and broke its windows so that all the passengers could escape before the bus went up in flames.

“It is a miracle, it could have been carnage. The police were outstanding, blocking the bus and getting the children off,” said Milan prosecutor Francesco Greco. The driver, 47-year-old Ousseynou Sy, is originally from Senegal but has lived in Italy for a number of years and has had Italian citizenship since 2004, according to national newspaper La Repubblica. He has a prior criminal record for drink-driving and sexual assault on a minor.

Students of the Vailati di Crema middle school who were on board the bus told reporters that Sy diverted from the planned route, tied up the students’ hands, and shouted: “Now we’re going to Linate [airport]… no one’s getting out of here”, while waving a petrol can and a lighter.

The carabinieri were alerted by a 12-year-old boy who was able to free his hands and dial the 112 emergency number on his cell phone.

They were able to bring the bus to a halt at a junction and broke the vehicle's windows as Sy began pouring petrol over the floor and shouting that he wanted to avenge those who’d died at sea as a result of the Italian government’s anti-migrant policies, according to La Stampa daily newspaper. Fifty-one students and three adults were on board the bus when it was hijacked, according to media reports. Twelve children and one adult have been taken to hospital for low-level smoke inhalation and the driver himself is being treated for burns.

“I lost three children at sea,” the man said, according to one of the rescued children.

“He threatened us, said that if we moved he would pour the petrol and set it alight. He kept saying there were so many people in Africa who kept dying and that it was the fault of [deputy prime ministers] Di Maio and Salvini,” a rescued girl told Italian media.

“Then the police arrived and saved us,” the rescued girl said.

Sy had no links with Islamic terrorism, Alberto Nobili, head of counter-terrorism at the Milan public prosecutor's office, told a press conference, saying he “acted as a lone wolf”.

Planning the hijack over several days, Nobili said Sy “wanted the whole world talking about his story”. He posted a video on Youtube to explain his actions and say ” Africa — arise”, directed at family and friends in Crema but also in Senegal. Police broke the windows of the bus to free the children on board. Photo: Flavio Lo Scalzo/AFP

Sy has worked full time for the Autoguidovie bus company since 2004, according to part of a statement from the company printed in La Repubblica.

“Over the years he has never shown any imbalance, nor have we ever received complaints about his conduct as driver […] we were not aware of his criminal record,” the statement says.

Sy is now under investigation for an aggravated attack and kidnapping of minors.