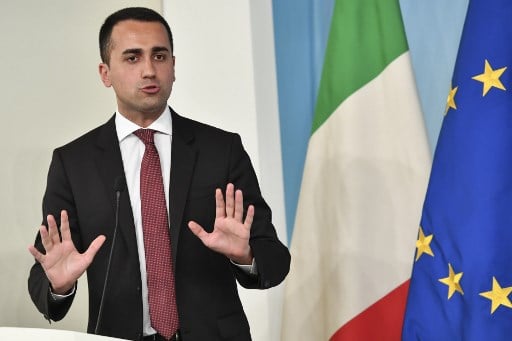 Luigi Di Maio at a conference in Rome on July 3, 2018. Photo: Andreas Solaro/AFP

League party leader Matteo Salvini, who holds the position of co-deputy prime minister alongside Di Maio as well as being Italy’s interior minister, has publicly endorsed the event, along with Italy’s Families Minister Lorenzo Fontana and Veneto governor Luca Zaia, both of whom are also League members.

But both Di Miao and Italian prime minister Giuseppe Conte, who has no party affiliation, have been quick to distance themselves from the conference.

The event is being run by the US-based organisation World Congress of Families, designated as a hate group by the Southern Poverty Law Center.

Speaking on Tuesday, Di Maio said: “The League in Verona celebrates the Middle Ages, we do not.” He has previously described the event as being for “right-wing losers” who do not represent the views of the government.

Earlier this month Conte ordered the event’s organisers to remove the government’s logo from their branding, clarifying that the event does not have his endorsement.

Parliamentarian Giorgia Meloni, who is leader of the far-right Brothers of Italy party, wrote in a tweet that the M5S was spreading “fake news” about the conference by saying it was anti-women.

The tweet goes on to say that M5S is “for free drugs, #gender propanda, mixed marriages: practically a bunch of #gutterpunks in government.”

The disagreement has brought additional strain to the already frayed relationship between Italy’s two ruling parties, who have recently been at loggerheads over the controversial high-speed ‘Tav’ rail line construction project intended to link the northern Italian city of Turin with Lyon in France.

League insists that the project must be completed, while M5S is strongly opposed, having repeatedly promised voters that it will be scrapped.

Earlier this month Salvini appeared to be dangling the threat of a government crisis over the issue, but the dispute ultimately fizzled out and a tender process for further construction works has been temporarily put on hold.