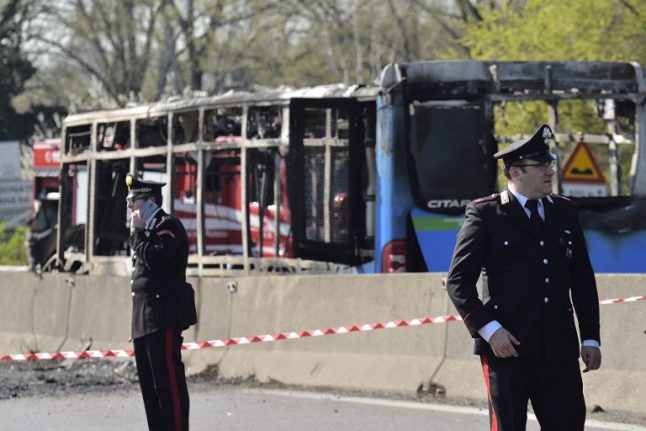 No one was seriously injured in the bus hijack near Milan. Photo: Flavio Lo Scalzo/AFP

“He let us on to the bus and immediately barricaded us in,” a teaching assistant said, recounting how the school bus hijacking in Italy unfolded before 51 children escaped as the driver torched the vehicle.

“I was a second away from death,” Tiziana Magarini told AFPTV on Thursday, her eyes still red and her voice unsteady a day after the harrowing incident.

On Wednesday, a 10-minute bus trip turned into a 40-minute nightmare for schoolchildren in Crema, east of Milan, after their driver hijacked the vehicle and tried to drive it to a Milan airport. Driver Ousseynou Sy was usually “very well behaved, normal,” Magarini said. But on Wednesday, the Italian bus driver of Senegalese origin came to work with a knife and cans of petrol. Seeking to draw attention to migrant deaths in the Mediterranean, Sy tied the two teachers to the door and told Magarini to tie up the children, using electric cable.

She said she “tied them up badly”, so they could get free. When Sy collected everyone's mobile phone, “I managed to let some of the children know with my eyes to keep them,” she added. Sy then asked her to finish pouring the petrol over seats and curtains, as the children panicked.

“The screaming, I couldn't calm them down,” Magarini said. “He was saying weird things, I didn't really understand. He was talking a lot about Linate airport. But he didn't say what he wanted to do. He said 'I don't want to hurt you' and then he threatened us.”

“No one is getting out of here alive,” Sy reportedly told the students as he diverted from the route back to school and took the motorway to the airport.

READ ALSO: 'Someone has to pay': Italy reeling after school bus hijack “He said repeatedly that so many people in Africa keep dying,” said one girl.

The bus stopped and started several times while children telephoned for help. One said they called police who didn't understand. They then called their father.

'The driver wants to kill us'

Another boy exchanged voice messages with his mother. “Mum, we're on the bus, I don't know where they're taking us… the driver wants to kill us, he has a gun, call the police,” the recorded message said, according to Italian media. Magarini discreetly called the school switchboard, where a colleague picked up and heard children screaming.

As police cars converged on the bus to stop it, “the children were banging on the windows, calling for help,” said policeman Roberto Manucci, one of the first on the scene.

The driver crashed through a roadblock, taking out a car, before being trapped by others. Several police distracted him at the front of the hijacked bus while colleagues forced open the back door and smashed windows. The charred remains of the bus. Photo: Flavio Lo Scalzo/AFP

“I heard an explosion at the back window and in two seconds an amazing team was there, they got them all out,” said Magarini.

Amateur video shows the terrifying moment as the children ran away screaming and crying. At the same time, Sy set fire to the petrol-soaked vehicle with a lighter before being subdued by police. Trapped next to the driver, Magarini was dragged to safety by a policeman.

“I was a second away from death,” she said.

Police carried out a hostage rescue operation “like you see in films about special forces”, said Milan prosecutor Francesco Greco.