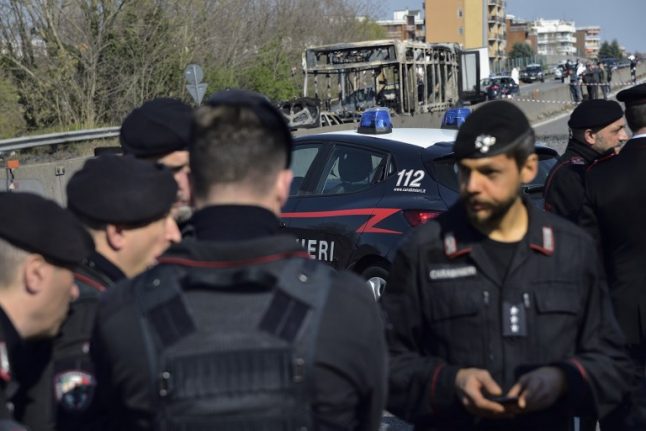 Ousseynou Sy of Crema, near Milan, tried to set the bus on fire with 51 children and three teachers aboard on Wednesday morning, though police were able to free all passengers before anyone was badly hurt.

He had been driving school buses for 15 years, despite having his licence suspended for drink driving and receiving a conviction for sexually assaulting a minor. Police were able to stop the bus and free everyone onboard before it went up in flames. Photo: Flavio Lo Scalzo/AFP

In a circular sent to police stations across Italy on Friday morning, the interior ministry called for all legally required checks on professional drivers to be carried out, as well as stating that authorities were looking into the possibility of tightening the law.

The memo urged local officials and schools to follow up with contractors to make sure that their drivers had been properly vetted. It also instructed police patrolling Italian roads to be vigilant and step up checks on motorists.

Sy was apparently able to conceal his suspended licence from his employer by going on extended sick leave, Italian media reported. He was barred from driving for six months and fined €680 after police caught him caught driving slightly over the legal blood alcohol limit in November 2007, but it seems neither he nor the authorities informed his employer about the offence. The northern Italian transport company that has employed Sy since 2004, Autoguidovie, said neither was it aware of his 2018 conviction for sexually assaulting a 17-year-old girl onboard a bus in 2010. The firm says it checked him criminal record when it hired him, but the law does not require employers to carry out regular background checks once a driver is on staff.

Sy remains in custody after his arrest on Wednesday, after prosecutors warned that he could attempt another attack if he were released.

He has been moved into a special protection wing inside the prison in Milan where he is being held, police said, after other inmates threw food at him in the canteen.

READ ALSO: 'Someone has to pay': Italy reeling after school bus hijack Police stand guard outside the school in Crema that the children on the bus attend. Photo: Miguel Medina/AFP