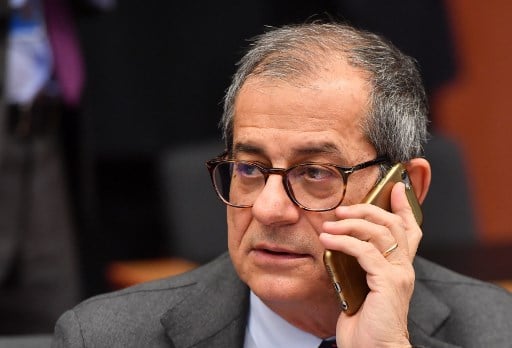 “We face a widespread slowdown in growth across Europe, and in Italy we are headed for zero” growth, Tria told an economic forum in Florence on Sunday.

Italy's central bank and the International Monetary Fund have both estimated that the eurozone's third-largest economy would expand by a meagre 0.6 percent this year, while the European Commission was more pessimistic, pencilling growth of just 0.2 percent.

In the fourth quarter of 2018, the Italian economy contracted owing to a slowdown in exports, plunging it into a technical recession and worsening the government's budget problems.

But despite pressure from EU officials to maintain fiscal discipline, Tria said: “No one is asking us for a corrective manoeuvre, so I exclude that.”

The EU warned last week of a new row brewing with Italy over its budget, barely a few months after both sides agreed on a hard-fought deal with Rome's disputed 2019 finances.

Germany, Europe's leading economy, is struggling at the moment owing to significantly weaker demand for its exports, and those problems have affected eurozone partners, with which it does much of its trade.