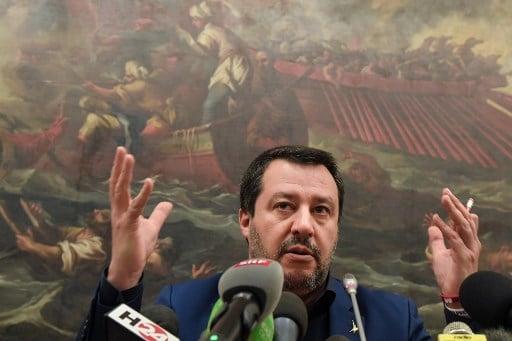 The meeting hosted by deputy prime minister and interior minister Salvini at a luxury hotel in Italy's commercial capital is being held under the slogan “Towards a common sense Europe.”

Salvini has pledged to bring about a “new European spring” by working with right-wing populist and nationalist parties across the continent to “change Europe,” and hopes to place himself as the leader of a grouping that includes the likes of Marine Le Pen, Viktor Orban and Germany’s AfD party.

European nationalists are hoping to end up with a so-called “sovereignist” grouping of at least 70-80 MEPs in the European Parliament after the May 26 election.

Far-right populists such as Salvini’s League are in government in Italy, Austria, Poland and Hungary and are expected to do well in the European elections at the end of next month.

But differences in political outlook and policies may prevent them from forming a united front.

The few confirmed attendees are Germany's Alternative for Germany (AfD), the Danish People's Party, and the Finns Party.

“She is busy with her election campaign. She’ll be in Brittany this weekend and next week she has other appointments in her diary in other parts of France,” a spokesperson told Italy’s Ansa news agency.

Orban has voiced admiration for Salvini but his party belongs to the European parliament's centre-right European People's party (EPP) group.

Most of Europe's right-wing nationalists are currently divided into three blocs and a tangled web of alliances in the European Parliament, which they would like to overhaul if not destroy.

They are the Europe of Nations and Freedom (ENF) group – which includes the League and RN as well as Austria's Freedom Party – the European Conservatives and Reformists (ECR), and the Europe of Freedom and Direct Democracy (EFDD).

The dream of Salvini – and of Steve Bannon, US President Donald Trump's former strategist – has been to unite the disparate forces and form an “international of nationalists”.

Despite their shared dislike of immigration and the EU, Europe's populists remain divided on other key issues.

While Italy's League, Poland's PiS and Hungary's Fidesz highlight Europe's Christian cultural roots, the RN has shied away from taking a similar stance in a country where the majority is in favour of secularism.

Salvini and Le Pen have both praised Russian President Vladimir Putin, a view not shared by PiS in Poland or the Finns Party.

His party has gone from strength to strength in Italy, doubling its support since the general election last March.