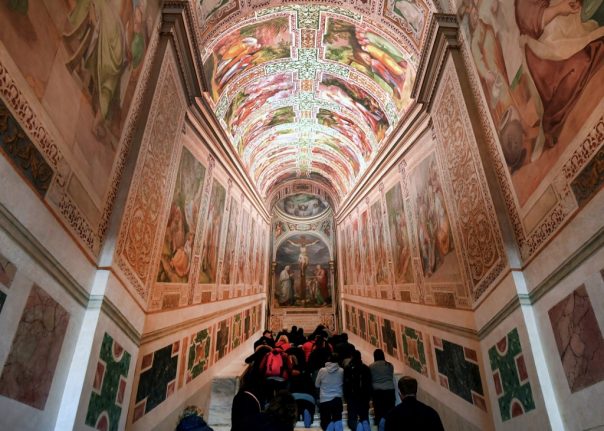 Believers line up to climb the Santa Scala, one of Rome's most sacred Catholic sites. Photo: Tiziana Fabi/AFP

From this week until Pentecost on June 9th, visitors can climb the original marble steps that Jesus Christ is said to have ascended on his way to be tried by Pontius Pilate in Jerusalem.

Legend has it that the staircase was brought to Rome by St Helena, mother of Emperor Constantine the Great, around 300 years after Christ's death. During the Renaissance they were installed in a sanctuary next to the Basilica di San Giovanni in Laterano in south-east Rome, where they have remained ever since. For the past 300 years, the 28 steps have been covered by wooden slats installed on papal orders to protect the white marble, while pilgrims were ushered to replica stairways on either side to climb instead.

But on Thursday, the Holy Stairs reopened to the public for the first time in centuries in their original state. Visitors are permitted to climb them only on their hands and knees and with protective covers over their shoes.

“I already did it on the wooden steps but it's much more moving now… It's very emotional,” one pilgrim told AFP.

The Vatican Museums' experts have also worked to restore the 16th-century frescoes that line the staircase to their original glory, as well as the 'Holy of Holies' sanctuary they lead to and which stores some of the Roman Catholic Church's most sacred relics.

The restoration works, which have been ongoing for more than ten years, were funded in large part by the Getty Foundation in the United States.