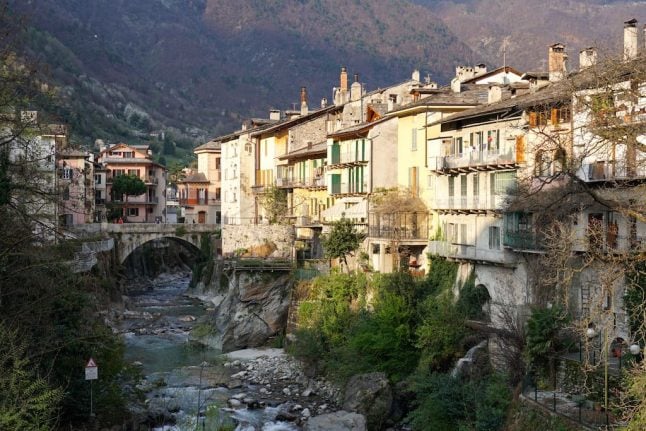 A crotto is a type of mountain grotto, and Chiavenna is the lovely mountain town in Valchiavenna, above the northern end of Lake Como, where you can find them.

The name Chiavenna comes from the Latin clavis, key, a reference to the fact that the town lies between three mountain passes: Maloja Pass, Septimer Pass and Splügen Pass. These three passes led to Rezia, the Roman Empire’s alpine territories, and remained important communication routes during the Middle Ages. Chiavenna is a town that’s used to people who are passing through.

Chiavenna’s crotti are characteristic of both the town and the valley, with about 80 of them in total. They’re also found elsewhere around Lake Como, although it’s Valchiavenna that has the highest concentration. You can often find them in groups, such as along Corso Pratogiano in Chiavenna.

The crotto’s defining characteristic is what’s known as the sorèl, a jet of air that comes into the crotto from the mountainside. It was formed during postglacial landslides and serves as a natural fridge. With a constant temperature of 4-8 degrees C all year round, it’s perfect for storing wine, salumi and cheese. The level of humidity of your crotto determines whether it’s more suitable for conserving dairy or cold cuts and in particular the dark, tender bresaola that comes from Valchiavenna. Drier ones, for instance, are better suited to cheese. Yet to say crotti are just handy places to keep food would be to tell only half the tale. “Si vende vino bono e si tiene scola de umanità,” ('Good wine sold and school of humanity held') – that's what they're about, according to what was written in 1781 on the wall of the Giovanantoni crotto in San Giovanni di Chiavenna. Leonardo da Vinci speaks of Chiavenna in his Codex Atlanticus as “miles and miles of good osterias,” those wayside inns that offered travellers a glass of something and a bite to eat. Crotti from the outside. Photo: Rachael Martin/The Local

The majority of crotti are still in private hands, and have been passed through families to their current owners today. In the past, they were an important part of the town’s social fabric. Not only did they provide a focal point for people’s social lives where people could spend time together but they were also places where people met to discuss important matters and make decisions.

It was usual to head up to your crotto on a Sunday and sit outside at tables and benches that were often made of local soapstone as they whiled away the afternoon with a jug of local wine and a plate of something to eat. Made from the same soapstone is what is known as the piota, a slab placed upon a heat source that’s perfect for cooking a few ribs on. Today, they’re popular with both those who live in Chiavenna and those who are passing through, a nod to a history that hasn’t changed. In winter the town is on the ski route, and the crotti are always a nice stop on the way home.

Before you leave don’t forget to pick up a packet of biscotti di Prosto, named after a nearby hamlet: they’re rich, buttery, extremely moreish, and perfect for taking home as a memory of your day. The village of Prosto in Valchiavenna. Photo: DepositPhotos

Start off with an antipasto, which is usually salumi and pickles, including delicious sweet pickled onions. Then follow with pizzoccheri di chiavenna (local buckwheat tagliatelle) or gnocchetti chiavennaschi: these small misshapen gnocchi are covered in butter, cheese and garlic, and are one of the most typical dishes from Chiavenna that you can get.

For your main course, choose from grilled meats and stews, accompanied by potatoes cooked on the piota or polenta. Polenta taragna – buckwheat polenta with butter and local cheese – is also a speciality. Crotasc
Michela Prevostini offers traditional dishes using locally sourced produce at this higher-end favourite, where her family has been serving hungry customers since 1928. They also have their own wine under the label Mamete Prevostini.

Crotto Quartino
One of my personal favourites in summer. Situated in the valley just outside Chiavenna, this is the type of place for long lunches with friends on lazy Sundays.

The town’s annual Sagra dei Crotti, or Crotti Festival, began in 1956 and takes place during the first two weekends of September every year. The aim is to share the philosophy of 'slow life', both in terms of traditional local food and its way of bringing people together.

It’s a popular and much-loved festival, and almost a rite of passage for young people who live this side of Milan. Book your hotel in advance to make sure you get a room.

Rachael Martin is a British-born writer based near Milan. Find more of her work on her website.