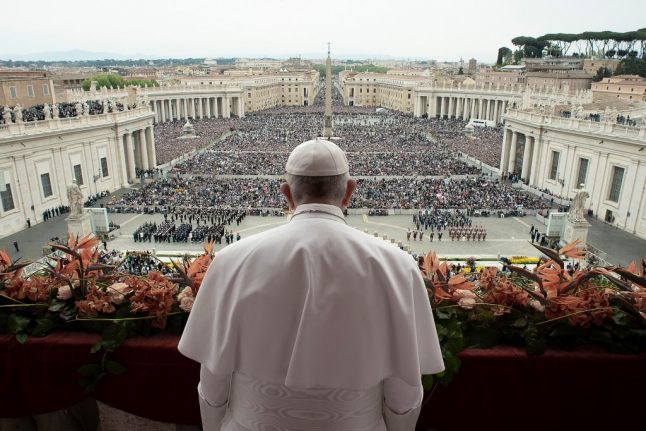 In his traditional Easter Sunday address to the faithful at the Vatican, where some 70,000 were gathered in Saint Peter's square, the pope also expressed his “sadness” at news of the deadly bomb attacks on churches and hotels in Sri Lanka.

“May conflict and bloodshed cease in Libya, where defenceless people are once more dying in recent weeks,” Francis said.

“I urge the parties involved to choose dialogue over force and to avoid reopening wounds left by a decade of conflicts and political instability.”

In Syria, where President Bashar Al-Assad has steadily recovered territory lost to rebel groups, the pope lamented the fate of “the beloved Syrian people, victims of an ongoing conflict to which we risk becoming ever more resigned and even indifferent.”

“Now is instead the time for a renewed commitment for a political solution able to respond to people?s legitimate hopes for freedom, peace and justice, confront the humanitarian crisis and favour the secure re-entry of the homeless, along with all those who have taken refuge in neighbouring countries, especially Lebanon and Jordan.”

The pope noted how Easter, the holiest Christian festival, “makes us keep our eyes fixed on the Middle East, torn by continuing divisions and tensions.”

On Saturday, Kiir called on Machar to return home “urgently” to help form a government of national unity.

Pope Francis expressed his sadness at the deadly bomb attacks in Sri Lanka and said he stood with the
victims of “such cruel violence.”

“I learned with sadness the news of the attacks which today, Easter Sunday, brought mourning and pain,” Francis said.

Almost 160 people including dozens of foreigners were killed in a series of eight bomb blasts that ripped through high-end hotels and churches holding Easter services in the island state Sunday.

“I want to express my affectionate closeness with the Christian community, attacked while it was at prayer, and to all the victims of such cruel violence.”