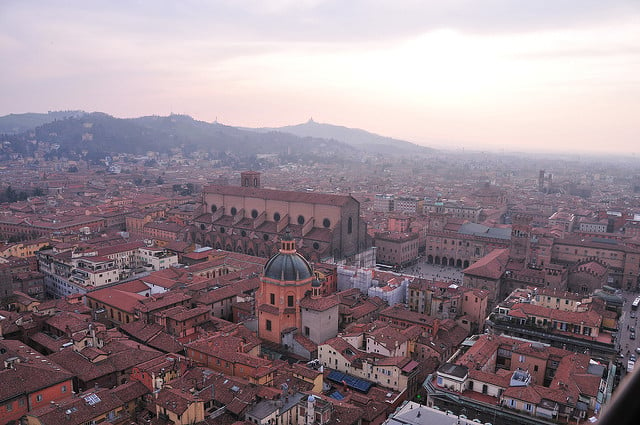 Bologna is known as 'la dotta, la rossa e la grassa' – that's 'the educated' in a nod to its university, Europe's oldest; 'the red', in reference to the terracotta hues of its buildings and the city's historic communist leanings; and most importantly, 'the fat', in reference to the delicious food. Even by Italy's notoriously high standards, Bologna is a foodie hub, as you'd expect from the place that invented bolognese (just remember it isn't called that here!). The markets in the centre are great for fresh fruit and pastries, Via del Pratello is a great spot for lunch, and the student area near Via Zamboni has plenty of options for a filling aperitivo – but really you can't go far wrong wherever you choose to eat.

The two towers are a symbol of the city, and the shorter of the pair, Garisenda, leans much more dramatically than Pisa's leaning tower. It is so famous in Italy that Dante invoked the tower in his Commedia, so look out for the plaque with the quote. You can't climb Garisenda, but it costs just €3 to climb its sister tower Asinelli and get a beautiful view over the city – not to mention a great leg workout. These towers are just two left of the many that used to dot the landscape in medieval times, when rival noble families would compete to exert their dominance by building the tallest tower. These pretty arches that line Bologna's streets are a handy shield from rain or blinding sun, and years ago they were where merchants would set up stalls to sell their wares. You can see evidence of the former markets on Via Indipendenza, where an inscription on the ground reads “panis vita, canabis protectio, vinum laetitia” (bread is life, cannabis is protection, wine is fun), marking the spot where these products were once sold. It's well worth making the 3.8km hike along the world's longest stretch of porticoes, southwest of the city centre, which leads to the beautiful Sanctuary of the Madonna San Luca and panoramic views back over the city.

These porticoes are numbered so you can track your progress until you reach the final arch, number 666. Seems like an odd choice of number for a religious site? Apparently the architect fell out with the church halfway through the job, and this was his revenge…

READ ALSO: The red, the fat, the learned: The story behind Bologna's curious nicknames

As well as the San Luca, the city centre itself boasts plenty of impressive churches. The Chiesa della Santa has the mummified remains of Saint Catherine of Bologna in an eerie side chapel, while San Domenico Basilica has a Michelangelo statue and a piano used by Mozart during his time studying in Italy.

There are also the seven churches of Santo Stefano, built over a six hundred-year period in different styles and now forming one unique sprawling site. And finally, for a spectacular dining experience try Le Stanze, a restaurant in the converted chapel of a noble family.

At one time, Bologna was a city built on canals with a thriving textiles industry, still echoed in many of the street names such as Via delle Moline (Street of the mills). Most of the canals now lie under the car parks, sadly, but if you wander along Via Piella (where you'll also find several great restaurants), you’ll see a small window built into the wall, through which you can spot the canals. Another place offering a glimpse of how the city used to look is Sala Borsa, the main library, where through the glass floor you can see Roman remains and even go downstairs to walk among them. There's another section of a Roman road inside a furniture shop, Roche Bobois, in the centre of the city.

6. It's perfectly placed for day trips

Bologna is a small city with plenty to do, but if you feel like venturing further afield, it's a good base either for hikes into the surrounding hills, or train journeys to the rest of Italy. Modena, Ferrara, Venice, Florence and Parma are all easily doable within a day and there are plenty of seaside resorts within reach too. Venice is just a train ride away. Photo: SarahTz/Flickr

Lots of the churches have Renaissance art on show, and the Pinacoteca Nazionale has art created in the region from 200 AD to the Baroque period. Other museums for art buffs are the Municipal Art Collections, with art from the 14th to 19th centuries, Galleria D'Arte Maggiore and modern art museum MAMbo. There's also a thriving street art scene; you're bound to spot some examples just strolling around the centre, and the area around Porta Mascarella is another good location.

8. It's got the best university ever

No, not the University of Bologna – although it is very interesting, with a creepy ancient anatomical theatre to visit, and one of the country's most popular Erasmus destinations. We're talking about the Carpigiani Gelato University, where you can take professional courses in making gelato. It's attached to the Gelato Museum, which has a range of experiences on offer, from a basic tour through the history of gelato to workshops where you can make your own – and whichever you choose, you'll get a free delicious ice cream included.

9. It's not too touristy

Maybe the best reason to visit Bologna is that you'll feel like you're truly discovering the city, rather than being herded along in a crowd of tourists. It's slowly becoming better known, but you're far more likely to hear Italian than English on the streets, you'll often get a cafe to yourself, and other than the area around the central square, Piazza Maggiore, the restaurants and bars all offer good food at reasonable prices rather than being designed to trap tourists. Buon viaggio! READ ALSO: Weekend Wanderlust: How to spend the perfect 24 hours in Bologna