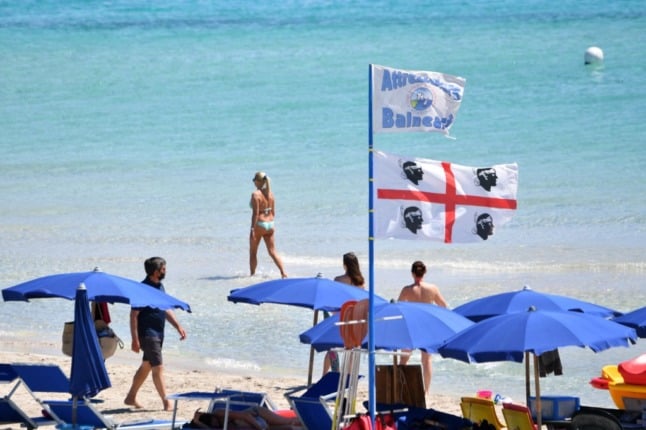 Make friends in Sardinia by making an effort to learn its local language. Photo: Andreas Solaro/AFP

Classified as an “endangered” language by Unesco, Sardinian is spoken by an estimated 1.3 million people worldwide. Most people on the island today speak it to some level, though younger generations are less familiar with it than Sardinia’s famously long-living seniors.

Like Italian, Sardinian has roots in Latin – in fact, some linguists argue that, of all the modern Romance languages, Sardinian is the closest to Latin – but it also displays much older influences, the last traces of the ancient tongue used by the island’s earliest inhabitants before the Romans invaded. Later conquests left echoes of Greek, Spanish and Catalan.

To give you a sense of how different Sardinian is to Italian, just compare these pre-Latin Sardinian words with their Italian equivalents: “tzirighelta” (in Italian, “lucertola” – lizard), “tziribricu” (“cavalletta” – grasshopper) or tzintzigorru (“lumaca” – snail). While Sardinian is one of two official languages on the island alongside Italian, it’s far from the only local vernacular, explains our reader Nico Enna, a native Sard speaker.

There’s also Sassarese, found around Sassari in the north-west, and Gallurese in the north-eastern Gallura area, which each combine elements of Sardinian and Corsican, as well as Algherese, a form of Catalan spoken by a few thousand people around the north-western town of Alghero. Rarest of all is Tabarchino, an old Ligurian dialect related to Genoese and heard only on the islands of San Pietro and Sant’Antioco off Sardinia’s south-west coast.

Below Enna explains some of the most common phrases you’ll hear in Sardinia, and where to use them.

Coment’ istas? – Sardinian for “How are you?”

Ebé – different from Italian “embè?” (which means “and so?”), in Sardinia it is used like “Hey mate!”

Adiosu – “Goodbye”. Different from Italian “addio”, it does not mean “farewell” but simply “bye”. Obviously taken from the Spanish “adiós”.

A menzus bìere – like “See you later” or “Take care”, mostly used in the central-northern part of the island.

Zi vidimmu – “See you” in Sassarese. In Sardinian it would be nos bidimus in the north, nos(i) bideus in the centre and south.

The Sardinian slang everyone knows

The most famous Sardinian words by far are eja and ajò. Everybody knows them and everybody uses them, even if they do not speak Sardinian and just spend one week on the island. They are as famous as the official Sardinian flag with the “bàtor moros”, the “four Moors”. While those two are Sardinian, un bè is an expression originating from Sassarese. It means “a lot”; literally un bè would translate to “un bene” in Italian, meaning “a good (amount of something)”.

It is impossible to spend a couple of days in Sassari without hearing this word many times, and of course you do not need to speak Sassarese in order to use it. Some examples: “un bè togo” means “really cool” (togo is “cool” in Sardinian), while “un bè di gente” (in Italian) or “un bè di jenti” (in Sassarese – pronounce the ‘j’ like a ‘y’) means “a lot of people”.

Ma ite – “Ite” is “what” in Sardinian and the expression means roughly “I don’t believe it”. Ma gosa is the Sassarese variant. They are similar to Italian “macché!” but used differently, as they can also express surprise, not only denial.

Ma ite ses narande (Sardinian) and ma gosa sei dizendi (Sassarese) – these phrases are used really often and mean “What are you talking about?”

Beer is the drink of choice in Sardinia, more so than anywhere else in Italy. Una spina or even una spinetta is a colloquial name for a small draught beer. In Sardinia you do not have to say “birra alla spina” (“beer on tap”) like you do in mainland Italy, because it is obvious that if you say spina you mean a beer. Indeed, there is nothing else you can get on tap in bars in Sardinia.

If you prefer it bottled, you can order un birroncino, a 33 cl bottle, known in Cagliari as un scioppino.

The expression for “please” is po praghere in the centre-north and po praxeri in southern Sardinia (the ‘x’ in “praxeri” should be pronounced like a ‘j’ in the French word “journal” or Portuguese “janeiro”).

If you would like trying ordering in Sardinian, you could say, for example, “un’ampudda ‘e birra e duas tassas, po praghere“, which means “a bottle of beer and two glasses, please”. In the north of the island, a bottle is un’ampulla.

If you prefer wine, then just ask for “un’ampudda ‘e ‘inu“. The word for wine is binu and the word for “of” is de, like in Spanish, but the first consonant of both words falls away in the pronunciation due to the fact that the word before ends with a vowel. (That’s just one of several complicated rules in Sardinian pronunciation.)

If you order un mirto or mirtino instead, you’ll get a small glass of the typical Sardinian liqueur made from myrtle berries, whereas if you choose un filu ‘e ferru you’ll be served a harder white spirit, like an aquavit.

You’ll recognize that the words themselves are mostly Italian, but the word order is taken from Sardinian and there are some elements which would not appear in this context in a sentence in standard Italian, like “ne” (“of it”) and “già” (“already”).

Nevertheless pretty much all Sardinian people speak more or less like that, in a kind of ‘Sarditalian’.

Do you speak one of Italy’s regional languages? We’d love to hear from you! Get in touch by emailing [email protected].