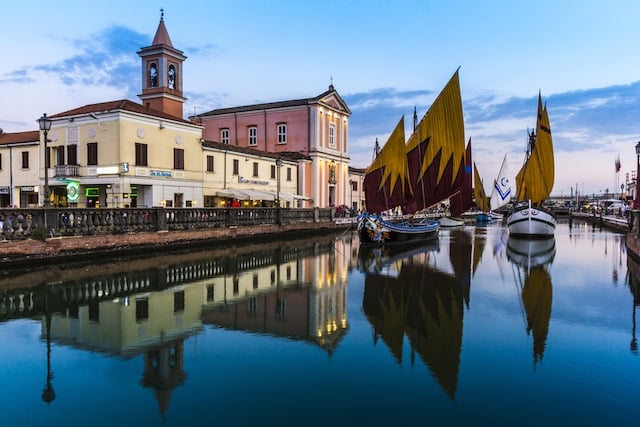 We might as well get the cliches out of the way: Leonardo Da Vinci was a genius of unparalleled stature. During the course of his life, he created some of the greatest paintings of his (and any other) age, as well as inventing machines and recording anatomical observations that wouldn’t be surpassed for centuries.

READ ALSO: Da Vinci revisited: Was he an environmentalist ahead of his time?

However, we often overlook the some of the strange, exciting and even lurid details of his life – a life that we can trace across Italy and beyond.

With the 500th anniversary if his death approaching on May 2nd, what better time to explore the life of one of Italy’s greatest geniuses?

For one of the most learned and accomplished men of his age, Leonardo’s origins were fairly obscure. Born in Vinci, Tuscany, in 1452 to Caterina, a humble peasant, he was the illegitimate son of a Piero, a notary who spent much of his time in Florence. His childhood was spent between the town and the nearby hamlet of Anchiano, where his mother lived.

In Anchiano, you can visit Leonardo’s childhood home, Casa Natale di Leonardo. A relatively humble stone dwelling, it is now a small museum, featuring exhibits about his early life. In Vinci, there are a number of sites related to Leonardo’s life. The church of Santa Croce is where he was said to have been baptized, while the castle overlooking the town is home to the Museo Leonardiano, which houses life-size models of some of his most famous inventions, as well as artefacts from his early years and an explanation of life in the Renaissance town.

Don't miss the contemporary artworks scattered through Vinci that were inspired by the master, from the geometric sculpture in Piazza dei Guidi to a 3D Vitruvian Man in Piazza Guido Masi and a giant horse in Piazza della Libertà.

In 1466, when Leonardo was 14, he moved to Florence, where his father based himself. Showing an incredible aptitude for drawing, he was apprenticed to the painter and sculptor Andrea del Verrocchio. Leonardo would spend much of his young adulthood there, learning his trade and working on some of his master’s commissions for hours on end.

It wasn’t all hard graft, though. The youthful Leonardo obviously had time for less salubrious activities than working on religious paintings. Aged 23, he was arrested for ‘sodomy’ along with a number of other youths. The charges were eventually dropped, but the incident has led to unceasing debate over his sexuality. The Adoration of the Magi was restored five years ago. Photo: Andreas Solaro/AFP

Much of the Florence that Leonardo would have known is gone, but some of the masterpieces he either painted or collaborated on can be found in the Uffizi Galleries, such as the Baptism of Christ (1475), the Annunciation (1472) and Adoration of the Magi (1482).

Believe it or not, Florence wasn’t big enough for Leonardo. He wanted more, and in 1482, he wrote to the Duke of Milan, Ludovico Sforza, offering his services as an engineer and artisan. Ludovico accepted his offer, and for the next 17 years worked in Milan for the duke, creating outlandish pageants as well as artworks.

When Leonardo wasn’t at his employer’s command, he had time to complete a number of commissions. Perhaps his most famous is, of course, The Last Supper, a fresco painted on a wall of the Santa Maria delle Grazie convent. (You can also visit the small vineyard across the road where Da Vinci would retire to tend to his grapes.) He also painted The Madonna of the Rocks for the church of San Francesco Grande, although that painting now hangs in the National Gallery in London. Other traces of Leonardo can still be found throughout Milan. The Castello Sforzesco has a number of Leonardo’s frescoes and paintings, and the giant equestrian statue in the Piazzale dello Sport is based on designs he made over a number of years.

For those who want to see reconstructions of some of the machines he conceptualized during this period of his life, the Museo Nazionale della Scienza e della Tecnologia Leonardo da Vinci is part of Italy’s Science and Technology Museum dedicated to his inventions. You can also find some of his inventions in situ, such as the wooden locks that made Milan's canal network possible (see a dry one at the end of Via San Marco), and Leonardo's Ferry, a type of boat that relies only on manpower and currents, and an example of which today sails on the River Adda north-east of Milan.

Following the invasion of the French in 1499, Leonardo fled the city and over the following years, hired himself out to feuding powers. During this time he assisted powers such as the Borgias and the Doges of Venice in planning defences and creating maps of their regions – his keen mind was very much in demand.

Some of the projects he completed include the canal port in Cesenatico, a 'little Venice' on the coast of Emilia-Romagna, as well as one of the world's earliest surviving examples of an ichnographic map (one that shows buildings' ground plans), depicting the town of Imola near Bologna. Da Vinci's map of Imola is today part of the Royal Collection at Windsor Castle in the UK.

It was also at this time that Leonardo was to accept the commission that would forever be associated with his name. In 1503, he started work on a portrait of Lisa Gherardini, the wife of a prosperous Florentine nobleman. With her enigmatic smile, the Mona Lisa has become perhaps the most famous painting in the world and today hangs in the Louvre, Paris – but you can admire (from afar) her family's impressive manor, the Villa Antinori, in the hills outside Florence.

Da Vinci's final residence in Italy was in Rome, where he spent time alongside Raphael and Michelangelo at the Vatican. Only one of his paintings hangs in the Vatican Museums today: the unfinished St Jerome in the Wilderness (1480), which is on special display free of charge until June 22nd 2019 as part of the anniversary celebrations.

As Leonardo drew towards the end of his life, leaving a truly staggering number of paintings, drawings, frescoes and notebooks in his wake, he gained the attention of the French king, Francis I. He invited Leonardo (and the Mona Lisa with him) to come to the Chateau d’Amboise south-west of Paris, where he joined a number of other painters and sculptors in decorating the place. Such was the esteem in which Leonardo was held that he was given the use of the nearby Chateau du Clos Lucé. There he spent the last three years of his life, continuously observing and recording his impressions, until he died on May 2nd 1519.

It is believed that remains buried at the chateau's Chapel de St-Hubert are those of Leonardo – definitive DNA tests will be complete later this year. Regardless, thousands of tourists turn up each year to pay their respects to a man who embodied the titanic changes taking place throughout the Renaissance.