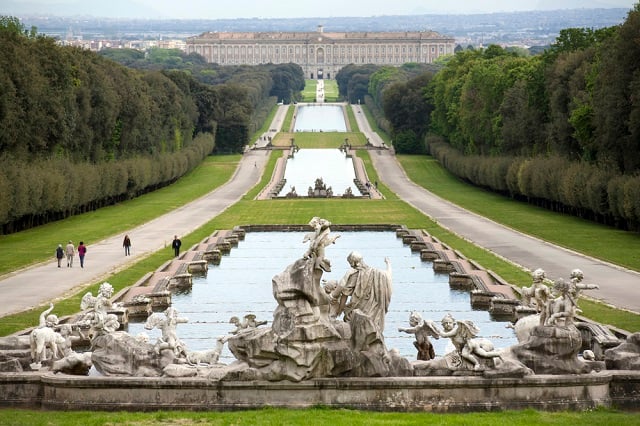 Can you guess which movie was filmed here? Photo: zoomarket/Depositphotos

Visiting some of the sights immortalized on the big screen is a great way to explore the country, whether you make like Audrey Hepburn and take a scooter ride around the capital or tuck into a pizza at the restaurant Julia Roberts visited in Eat, Pray, Love.

However, movie fans are advised against recreating La Dolce Vita's famous Trevi Fountain scene: each year, dozens of tourists are caught attempting to bathe in the landmark, and the city has ramped up fines in an effort to deter Anita Ekberg wannabes.

Instead, here's a list of ten beautiful spots from up and down the country which you probably never realized played a part in your favourite films. How many have you visited?

Nestled between Ischia Ponte (a square also featured in the film) and Ischia Porte on the island just off Naples, you'll find Bagno Antonio, a secluded beach which was the setting for a key scene in the 1999 thriller.

It's here that the title character first meets Dickie (Jude Law) and Marge (Gwyneth Paltrow) – but fans should travel to Procida, Ischia's underrated neighbour, to get the full Ripley experience. Wandering round its colourful streets you'll recognize plenty of views and buildings from the film, including the Church of Our Lady of Grace, pictured below. This part of Tuscany is worth visiting for the beautiful scenery alone, and director Ridley Scott was certainly impressed by the area – it was chosen as the site of the home of gladiator Maximus (played by Russell Crowe). The road through the hillside of Terrapille, Siena is shown at several important points in the film, as Maximus journeys home from war and later, just before his death. The cypresses here are nicknamed 'gladiators' for their role in the film, and the crew spent two weeks here getting the perfect shots.

The film itself might be one of the most violent of the century so far, but it scooped an Oscar nomination for the cinematography. Some scenes had the stunning backdrop of Matera, a city known as the 'Subterranean city' which lies is the southern region of Basilicata.

Matera is known for its cave network: a huge set of dwellings and churches carved into the rockface. They were inhabited for centuries, with barely any renovations or updates made, until the Italian government ordered locals to move out in the 1950's due to health concerns. Now, however, many of the homes are in use again, and visitors can even stay in a hotel in one of the caves.

Fans of the film should make sure to check out San Nicola dei Greci, one of the churches carved into the rock where the Last Supper was filmed, and follow the alleyways of the Sasso Caveoso to trace the route of the procession of the cross in the film.

A Room With A View tells the tale of Lucy Honeychurch, a young upper-class woman who travels to Italy under the watchful eye of her cousin Charlotte. For Lucy, Florence is a world of possibilities and vitality, far from the restrained culture of Edwardian England, and she explores the city's key sights from the Church of Santa Croce to the Piazza della Signoria.

But while those sights will make their way onto most tourists' itineraries, there's another gem which fans of the film should make sure not to miss.

The hotel where Lucy and Charlotte stay in the film, the Pensione Bertolini, can be found on the banks of the Arno. In reality, it's called the Hotel Degli Orafi, and boasts a magnificently decorated dining room as well as beautiful rooms – some, naturally, with excellent views.

The dining room of the Hotel Degli Orafi

5) The Royal Palace of Caserta, from Star Wars Episodes I and II:

In Reggia di Caserta, not far from Naples, visitors will find the Versailles-inspired Royal Palace – a Unesco World Heritage Site and example of stunning baroque architecture. But the palace was also transformed into Queen Amidala's royal palace on Naboo in two of the Star Wars films, Attack of the Clones and The Phantom Menace.

Star Wars fans will recognize the ornate rooms and staircases of the palace, and it's worthwhile addition to a travel itinerary in southern Italy. It's also featured in other films such as Angels and Demons and Mission Impossible.

Further north, take a pilgrimage to the spot where Anakin and Padmé got married, the Villa del Balbianello, which is Italy's most visited FAI (National Trust) property and offers beautiful views over Lake Como.

Top pic Anakin, bottom pic me. They shot scenes from Episode II at a villa I visited!

Julia Roberts plays Elizabeth, a woman hoping to step out of her comfort zone after a divorce by travelling around the world. Italy naturally represents the 'eat' portion of her journey, and you can follow in her footsteps by visiting the very same foodie spots.

The apartment Elizabeth stays in in Rome can be found at 18 Via dei Portoghesi, in the west of the city close to the Tiber River.

Fans can try out the San Crispino gelateria, an organic ice cream chain which has seen a boost in popularity after its mention in the book. In the film, Roberts eats hers by the Chiesa di Sant'Agnese in Agone in Piazza Navona.

Other eateries to try are the nearby Caffè della Pace in Via Della Pace, where Elizabeth eats with her Italian teacher as he explains the Italian approach to food and life, and the Osteria dell'Antiquario and Ristorante Santa Lucia, both of which are near Piazza Navona and feature in the film.

And in Naples, fans should brave the often hours-long queue at Da Michele to try a slice of their pizza and see if they enjoy it as much as Roberts in the film. They only serve margherita and marinara, and you'll spot a photo of Roberts near the entrance, among other family memorabilia on display in the unassuming restaurant.

Roberto Benigni's Oscar-winning film tells the story of the Jews' deportation from Italy, and one father's attempt to protect his son from the awful reality, using his imagination to convince him that life really is beautiful.

Arezzo authorities have capitalized on the film's success so visitors to the town will find many of the key filming locations clearly sign-posted. Check out Piazza Grande, Caffe dei Costanti – where Guido's son spots a sign saying 'no entry to Jews or dogs' – 19 Via Borgo Unito, the site of the shop Guido owns at the start of the film, and Piazza della Badia, where you can recreate the bicycle scene below.

Another important spot not to miss is the Teatro Petrarca In the movie, this is the opera house, where protagonist Guido first spots Dora. And in the nearby town of Montevarchi, the lavish Villa Masini, where the home of Dora's family was set in the film, is also well worth visiting.