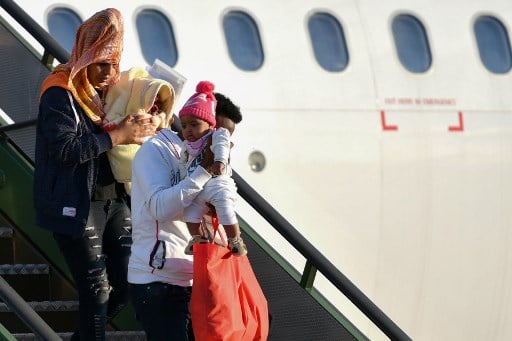 The refugees arriving in Rome on Monday. Photo: Albero Pizzoli/AFP

A group of 147 mainly African refugees, rescued from the Libyan city of Misrata, were flown to an Italian military airport near Rome on Monday for resettlement.

Italy's interior ministry said the group included 68 minors. Babies and toddlers could be seen among those disembarking from the plane at the Pratica di Mare military airport in late afternoon.

“This evacuation is a vital lifeline for people who faced serious threat and dangers inside Libya,” said Filippo Grandi, UN High Commissioner for Refugees. “Italy's ports are largely open to the women and children, to young people who are really fleeing war,” he said.

However he stressed that Italy is not open to “the human traffickers” and the often unseaworthy boats which are used in attempts to take people across the Mediterranean.

The move comes after almost a year of anti-migrant rhetoric from the Italian government and repeated claims from Salvini that “Italy's ports are closed”.

His port closure rule has left several rescue ships stranded with children on board in recent months.

Italy's populist government in September adopted the anti-migrant “security decree” which the government says will streamline rules for processing asylum applications. The controversial bill makes it easier to strip people of Italian citizenship, and has made the process of obtaining citizenship more diffiicult.

The decree was quickly used to force migrants out of a camp near Rome. A change in status for refugees under the decree also resulted in many being thrown out of shelters and left with nowhere to go.

Libya has been in chaos since the NATO-backed uprising that deposed and killed dictator Moamer Kadhafi in 2011.

People smugglers have taken advantage of the lawlessness to bring mostly sub-Saharan Africans from Libyan shores to Europe.

Italy is the first country to have stepped forward to receive evacuees from Libya since the most recent wave of violence began, the UN refugee agency said in its statement, adding that Monday's evacuation was carried out in collaboration with the Libyan interior ministry.

“It's now crucial that other States match this gesture and offer similar evacuation places for refugees caught up in the conflict. Turning a blind eye will have real and tragic consequences,” said Grandi.

?Breaking: 146 refugees were evacuated today from Libya ?? directly to Italy ?? in a joint operation between UNHCR, Italian & Libyan authorities.
With a worsening security situation in Tripoli, evacuations outside Libya are a much-needed lifeline for many vulnerable refugees pic.twitter.com/aJyWtpYk0n

Thousands of refugees and migrants continue to be held in detention centres, “where even prior to the recent clashes they faced dire and squalid conditions,” the agency said.

“More han 3,300 people are particularly at risk inside detention centres close to imminent or ongoing clashes,” the refugee agency added.