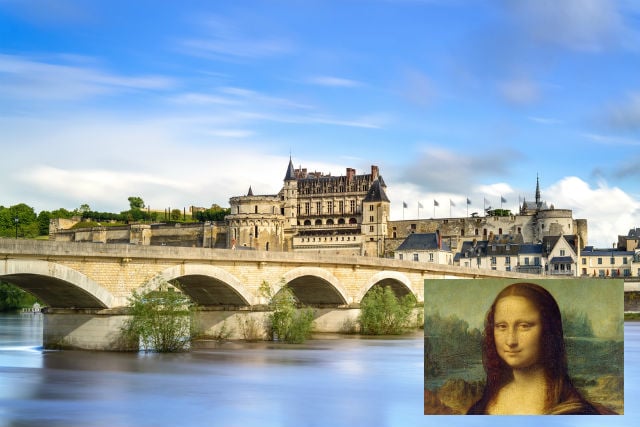 Photo: StevanZZ/Depositphotos
The Renaissance genius died in the French town of Amboise in 1519, at the age of 67. And France's Emmanuel Macron and Italian President Sergio Mattarella are travelling there on Thursday to mark the anniversary.
Leonardo was 64 when he was invited to France by the young Francis I, at a time when rivals Michelangelo and Raphael were rising stars on the Italian peninsula.
And with his own commissions drying up, it came as a great relief and no small vindication for the Tuscan artist, who received a handsome stipend as the “first painter, engineer and architect of the king”.
He brought with him three of his favourite paintings: the Mona Lisa, the Virgin and Child with Saint Anne, and Saint John the Baptist – all of which today hang in the Louvre museum in Paris.
READ ALSO: The joint celebrations come after months of mounting diplomatic tensions between Paris and Rome over the hardline policies of Italy's populist government and its support for France's anti-government “yellow vest” protesters.

The anniversary also has raised tensions over the works of Leonardo that are owned by France after Italy's far-right Interior Minister Matteo Salvini said the Mona Lisa should be brought home to Rome. He has since brushed the comment off as a joke.
'Fascinated with Leonardo'
Known as the “Sun King of the 16th century”, Francis I was widely seen as bringing the Italian Renaissance to France, extending his patronage to both artisans and architects.
Arriving in 1516, Leonardo was installed at the Clos Luce, a sumptuous manor house just a stone's throw from the royal chateau in Amboise where the king had spent part of his childhood.
At the time, Francis I was barely 23, and his ambitious mother Louise of Savoy “knew that Leonardo would be the man who would allow her son to flourish,” Catherine Simon Marion, managing director of the Clos Luce, told AFP. Photo taken in 2004 at Clos Luce in Amboise, a full size reproduction of the “helicopter” imagined by Leonardo da Vinci. Photo: AFP
“As for the young king, he was fascinated by (Leonardo's) knowledge of anatomy, botany, spirituality. He came to see him almost every day, calling him 'my father',” she said.
“Leonardo gave him a kind of apprenticeship in knowledge.”
An underground tunnel was dug through the soft limestone between the Clos Luce and Amboise's chateau to facilitate these frequent visits.
During his three years in the riverside town, Leonardo organised lavish parties for the court and worked to design an ideal city for Francis at nearby Romorantin — one of the polymath's many unrealised projects — all while continuing his research.
“He would follow his intense curiosity until the end,” Simon Marion said.
'Genius and mysteries'
His right arm was paralysed, but as Leonardo was left-handed, he was able to continue work, adding the finishing touches to the Mona Lisa, historian and television personality Stephane Bern says.
But whether he considered the painting finished by the time of his death, “we will never know,” he says.
“What is pleasing about Leonardo da Vinci is both his genius and his mysteries.”
On Thursday, after visiting Leonardo's grave at the royal chateau and then lunching at the Clos Luce, Macron and Mattarella will travel to the sprawling chateau of Chambord, whose central double-helix staircase is attributed to Leonardo — though the first stone was not laid until four months after his death. “Bird man” as imagined by Leonardo da Vinci on display in Amboise. Photo: AFP
“It's not often that we have a chance to celebrate Franco-Italian friendship, especially these days,” Bern said, in an allusion to the ongoing diplomatic tensions between the two neighbours.
The commemorations have sparked a further dispute after Italy baulked at the idea of its museums loaning their Leonardo works — including the iconic Vitruvian Man drawing — to the Louvre for a blockbuster show in October.
Although no longer in the headlines, the dispute has yet to be settled with the two sides still to agree on a definitive list.
With fewer than 20 Leonardo paintings and 22 drawings still in existence, many Italians are resentful that the Louvre possesses five of them.
The Mona Lisa and two others were sold to Francis I by Leonardo's muse and probable lover Gian Giacomo Caprotti, better known as Salai or Little Devil, even before the master's death.