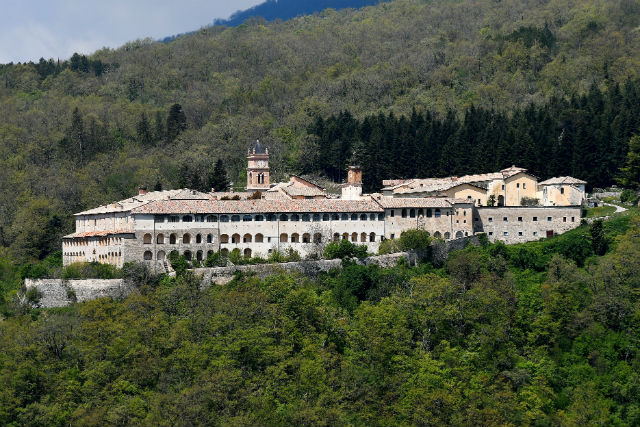 The Certosa di Trisulti monastery on the slopes of Mount Rotonari. Photo: Alberto Pizzoli/AFP
But trouble is brewing in the mountainside retreat. As project mastermind Benjamin Harnwell tours the austere monk cells, his walkie-talkie crackles into life: inspectors from the culture ministry are here.
Attempts to transform the sprawling Certosa di Trisulti into a far-right political boot camp risk falling foul of a bitter fight between Italy's populist parties ahead of the European elections later this month.
Harnwell, a close associate of former Trump White House adviser Steve Bannon, founded the Dignitatis Humanae Institute that will run the school and aims to create new leaders through “hardcore” personality formation.
“It'll be a case of sticking your hand, your fist into the soul of the man and dragging it out,” he told AFP. “Everything that's of this world we'll leave to the side, and everything that's good can be reworked.”
The “threats” the school aims to counter from among its sculpted hedgerows and cobbled paths are militant secularism within the West, jihadist Islamism, exploitation of the ordinary man by powerful elites and illegal immigration. Director of the Dignitatis Humanae Institute Benjamin Harnwell poses at the Trisulti Monastery Certosa di Trisulti in Collepardo on May 2. Photo: Alberto Pizzoli/AFP
Populist 'dream'
Bannon, who since being ousted from the White House spends his days fomenting right-wing populism in Europe, has pledged one million dollars to the project — but appears to be the only benefactor to have stumped up funds so far.
He and Harnwell have found fertile ground in Italy, which boasts the first modern-day populist government in Western Europe, based on a coalition of the far-right League and anti-establishment Five Star Movement (M5S) parties.
Bannon has described the League-M5S alliance as an “experiment that, if it works, will change global politics”.
“Steve's dream was to bring together a sort of leftish type of populism with a sort of rightish type of nationalism, and make a cohesive entity. And that's not exemplified anywhere better in the world than by the League and M5S,” Harnwell said.
READ ALSO:
Election results here could have a significant impact on the weight of the various political groups in the EU parliament. The League, which has shot to prominence on an anti-immigrant ticket under leader Matteo Salvini, is forecast to increase its seats in the European parliament from six to 26, while M5S is expected to climb from 11 to 18 — a combined 44 out of Italy's total 73.
M5S wants to form a new grouping to wrest power from the traditional left and right, but has failed so far to get the numbers needed through its overtures to small parties in Croatia, Finland, Greece and Poland.
Salvini, an ally of Marine Le Pen from France's National Rally party, has called on nationalist parties to join forces and has been busy wooing Hungary's anti-immigration Prime Minister Viktor Orban and Dutch Freedom Party leader Geert Wilders.
In August, Salvini signed up to Bannon's group “The Movement”, founded to spark a populist revolt in the EU vote.
The League leader has said he expects a new populist bloc to be the largest in the parliament — though he and his would-be bedfellows disagree on several key points, such as who across Europe takes how many of the refugees landing in Italy.
Frescoes and fraud
But Salvini's campaign at home has been hit by scandal, with his economic adviser accused of accepting a bribe from a wind farm entrepreneur linked to the Sicilian Mafia.
The M5S, which made “honesty” a keyword of its political campaign, has demanded the adviser resign.
And it has also set its sights on Bannon's flagship project here: the school. Harnwell's institute won a tender in 2018 to manage the former monastery, with its frescoed ceilings, Baroque chapel, library, and 18th-century pharmacy, where the monks brewed medicines from herbs gathered in the surrounding woods.
He hopes to offer a small number of students the first three-week course later this year, charging up to 1,000 euros a head, before opening all-year round to 250 or so disciples at a time.
Over 1,000 people have already expressed an interest, he says. Some 80 percent are from the anglophone world — Australia, Britain, Canada, and the US — while the rest hail from France, Germany, Italy and Spain.
'Caught in the crossfire'
“First we need to do the roofs, we need to do the sewers, put the bathrooms in,” and bring Internet access to the sprawling hermitage, which is currently home to 40 feral cats.
But Harnwell, who kneels and crosses himself before the altar every time he passes through the chapel to a corridor hidden behind a secret door, may not get the chance.
The culture ministry, currently run by the Five Star Movement, told AFP it has launched a probe into the tender following an Italian investigative report which suggested the Institute may not have won it fair and square.
Harnwell brushes off the allegations, saying the school is “caught in a crossfire between the League and M5S” as their electoral campaigns for the EU vote enter the feverish final stretch.
“The left is trying to suggest we're part of some money-laundering effort with the Russians, or the Mafia,” he says, dismissing such suggestions as total rubbish.