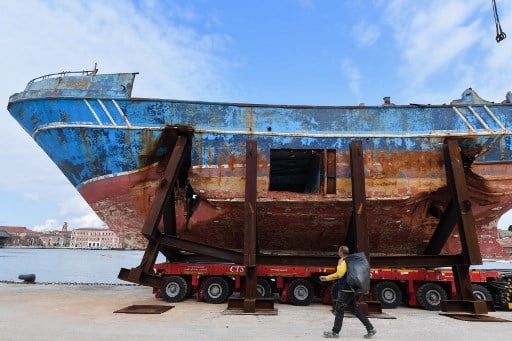 The blue and red fishing boat was carrying almost 1,000 people when it struck a Portuguese cargo ship that was coming to its aid off the coast of Libya during the night of April 18-19, 2015.

The boat sank quickly as the cargo ship's horrified crew raced to save those on board. Only 28 could be saved.

Swiss artist Christoph Buchel obtained permission from Italian authorities and a group that represents the victims to transport the hull to Venice as part of a project called “Barca Nostra” (Our Boat).

It will be shown in a shipyard by itself, without any explanation. “It is a quiet site, sheltered from noise, an invitation to silence and meditation,” said Paolo Baratta, the head of the Venice Biennale which opens on Saturday.

Italy spent around 10 million euros ($12 million) to raise the wreck from a depth of 370 metres (1,200 feet) and transport it to Sicily so the victims could be identified and given a proper burial.

A large rectangular opening was cut in the hull to allow rescue workers to complete the harrowing task of recovering hundreds of bodies, with dozens of medical examiners called in to examine the remains of 800-900 people.

Travel documents were found from Bangladesh, Eritrea, Ethiopia, Gambia, Guinea-Bissau, Ivory Coast, Mali, Senegal, Somalia and Sudan, along with small packets of earth from some migrants homelands and a school report that a teenager had sewn into their clothes.

“It seems we are looking at the worst massacre ever seen in the Mediterranean,” UNHCR spokeswoman Carlotta Sami said at the time.

The disaster provoked an emergency EU summit as Europe tried to control a migrant crisis that has presented the union with one of its biggest challenges ever.

The victims now lie in various Sicilian cemetaries, and it was decided to not destroy the boat but integrate it into a Sicilian “memory garden”.