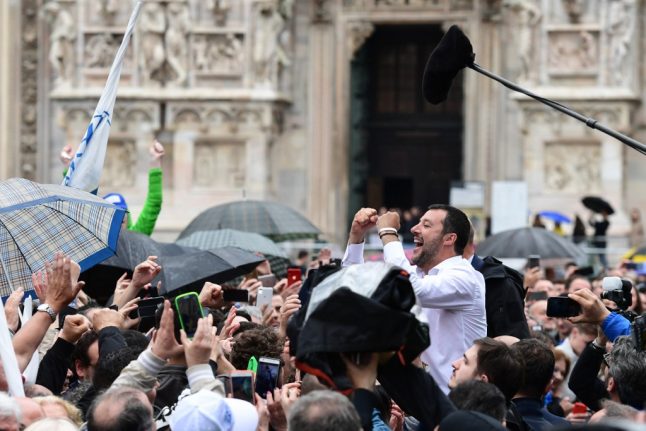 “Salvini is our captain. He's managed to unite a great people, and make us feel like proud Italians again, something we had lost.”

Ahead of May 26 European parliamentary elections, “we want to be an Italian country, with an Italian currency, we want to go back to what we were before, with our dignity and our independence.”

The anti-immigrant League party of Salvini, who is also deputy prime minister, does not want Italy to leave the eurozone or even the European Union, but Salvini does want to push reform in Brussels, notably to loosen rules on national debt.

Opinion polls say the League could garner 30 percent of Italian votes next Sunday.

The cathedral square in Salvini's hometown Milan was on Saturday flooded with thousands of his supporters who, like Elena, want “Italy first”.

“Salvini represents hope: he's the only one who defends the interests of Italians and Italy, in Europe and in the world,” said textile worker Luigi Tagliabue.

He has supported the League since it was a northern separatist party which dismissed southern Italians as lazy and corrupt, and approves of Salvini's attempts to close Italian ports to migrants.

Since Salvini and coalition partner the Five Star Movement formed a government in June, “crime is down, there's more legality and there's starting to be more respect for Italians who work and pay their taxes,” said Walter Frigeriou from northern town Como.

Simone De Giorgio used to support Silvio Berlusconi's Forza Italia, but says that now the League is “the only party capable of giving citizens serious and concrete answers.”

“In just 10 months, Salvini has managed to do what common sense Italians, from the centre-right, have waited 20 years for,” said 21-year-old De Giorgio, citing the right to self-defence, earlier retirement or civil education classes in school.

Crime and migrant figures were being reduced before Salvini came to power and his economic measures have spooked investors, with Italy having to pay much higher interest rates for its debt than before the League came to power, with the deficit also rising. Despite Salvini's past insults directed at southern Italians, people like De Girogio from southern city Taranto say he has “asked forgiveness with humility for his past mistakes.”

“Until now Europe has been for the banks, finance,” said Frigeriou, 60. “European leaders who have come today, like (France's far-right leader Marine) Le Pen, show that we're not alone.”

“Other people think like us: we must be united, but every state decides for itself.”

Nearby, hundreds of other protesters staged a counter-demonstration against Salvini, fascism and racism.

“No to the government of hate,” read one placard. “We don't stop solidarity,” read another.

Dozens of banners were hung from windows and balconies, telling Salvini “you're not welcome” and “only bridges, no walls”.