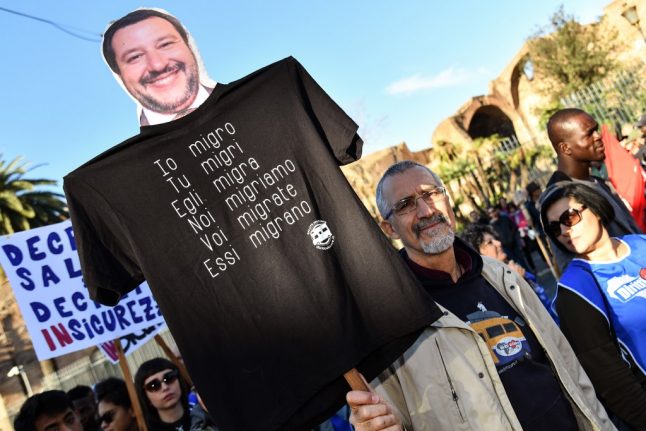 Italy's governing populist Five Star Movement (M5S) appeared to have coalition partner Matteo Salvini on the back foot on Monday, as it challenged the strongman over his latest anti-migrant decree.

The head of the populist League is courting votes ahead of the European elections by waging war on refugees and migrants attempting to reach Europe by boat, and he wants his bill adopted ahead of the May 26th ballot.

But while the bill was slated for debate at a cabinet meeting on Monday, the M5S signalled it was not prepared to pass the law in its present form. The update to Salvini's earlier security decree has drawn fire from his coalition partner M5S, the Catholic Church and even the UN's human rights agency.

While the M5S reluctantly passed the initial security law in November, political watchers said it knew it could stand up to Salvini now because he would not risk the government collapsing just before the EU vote. Any large-scale crisis in the government could affect the performance of the League and its plans to head up a nationalist grouping of far-right
parties in the Europe parliament.

“If [the decree] is just an empty electoral stunt it means they're taking Italians for a ride,” said M5S head Luigi Di Maio.

“We'll see [at the cabinet meeting]. The interior minister hasn't let us read it yet,” Di Maio said of the final draft.

The League has not appreciated the recent change in the anti-establishment M5S from yes-man to challenger.

Cabinet secretary and League member Giancarlo Giorgetti described his party's loyalty to the M5S on Monday as “unreasonable”, saying it “cannot last forever”. He also said Prime Minister Giuseppe Conte — whose name was put forward by the M5S when the coalition was formed — could not be a neutral leader.

Salvini lashed out at all and sundry on Sunday after discovering live on television that a Sicilian prosecutor had overruled his order to close the ports to migrants rescued by the German charity Sea-Watch. The furious minister said early on Monday that the government was not at risk — “as long as people keep their word”.

“I wouldn't want, for example, ports to be opened after everything I've done” to close them, he said.

“For my part, the government will 100 percent go on… there are two of us though,” he said in reference to Di Maio, who insists the draft law is flawed as it fails to properly address the return of migrants to their home countries.

UN human rights investigators said Sunday that the decree, which sets fines of up to €5,500 for each rescued migrant brought to Italy, violates international law.

Salvini, whose League has soared in popularity thanks largely to his hardline migration policy, wants the power to prevent any migrants from being brought to Italy by banning ships from entering Italian territorial waters.

He insists that those setting sail from Libya to seek safety in Europe should be returned to the crisis-hit country — an order that is illegal under international law, and which charity-run migrant rescue vessels have repeatedly refused to follow.

On Sunday Italian prosecutors impounded the Sea-Watch 3 and opened an investigation into its captain for allegedly aiding illegal immigration after it rescued 65 migrants off the coast of Libya last week and brought them to Italy.

READ ALSO: Italian nationalists rally to their 'captain' against Brussels The interior minister described himself as a “good Catholic” on Monday following an outcry sparked by his carrying a rosary, which many saw as a gratuitous prop, during a rally of the European far right in Milan on Saturday.

He also attributed a decline in the number of deaths at sea to a deal made with the Libyan coastguard. The figures supplied by the ministry, however, compared the first four months of this year off the Libyan coast with 12 months in previous years across the whole Mediterranean.

Critics also said his campaign against rescue vessels posed a high risk of boats sinking and people drowning during the perilous crossing in the Mediterranean with the tragedies going unrecorded.