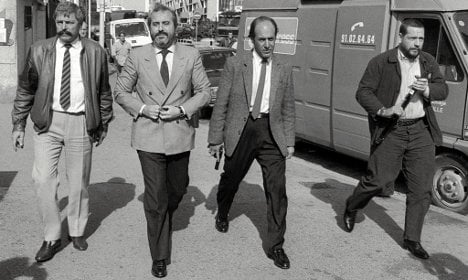 Falcone and his wife, magistrate Francesca Morvillo, were killed along with their three security escorts when a bomb exploded under their car on a road near the town of Capaci, in what has become known as the Capaci massacre.

Falcone, who was 53 when he died, spent most of his life trying to fight the mafia, bringing about the so-called ‘maxi trial’ in 1986-1987, which led to the conviction of 342 mafiosi. Hitmen used more than 500 kilogrammes (half a ton) of explosives in the attack, which was ordered by mafia godfather, Toto Riina, as revenge for Falcone's attempts to break up their syndicate.

But the brutal attack only helped to turn many in Sicily against the mafia and spark change in the region, which had long been in the grip of organised crime families.

ANALYSIS: Citrus fruits, scurvy and Cosa Nostra: the origins of the Sicilian mafia

“Many people refer to the assassination as something that changed their perception of the mafia,” Carina Gunnarson, a researcher of modern mafia influence in Sicily, told AFP.

“It revealed something about them: the attacks were just incredibly brutal, and everyone was watching the images on television.”

In 2014, four members of the Sicilian mafia were sentenced to between 12 years and life in prison for their role in the assassination. Two months after Falcone was murdered, fellow judge Paolo Borsellino was killed by another car bomb.

The two men, who worked closely together, have posthumously become national heroes, martyrs to the country's ongoing attempts to rid itself of the scourge of organised crime.

The Cosa Nostra first appeared in Sicily in the 1870s and soon infiltrated Italy's economic and political spheres. It has been linked to vote-buying and intimidation cases, especially at a local level, and last year the country's Interior Minister warned there was a “concrete risk” of mafia meddling in the general election.

In 2017, the Cosa Nostra's so-called 'boss of bosses' Toto Riina – who ordered the killing of Falcone and Borsellino – died in prison.

The Italian parliament's anti-mafia commission warned that this “paradoxically” strengthened Italy's mafia by allowing a successor to take over. This was not possible while Riina was alive due to the clan's internal hierarchies, but his efforts to direct the criminal group were hindered by his imprisonment.

At the end of 2018, Sicilian mafia clans came together for the first cupola, or meeting of mafia clans, in years to appoint a new leader to take Riina's place,

But new “boss of bosses”, 80-year-old Settimino Mineo, was never appointed. Sicilian police swooped on the meeting, arresting him along with 45 others in what authorities said was a “major blow” to the Casa Nostra.