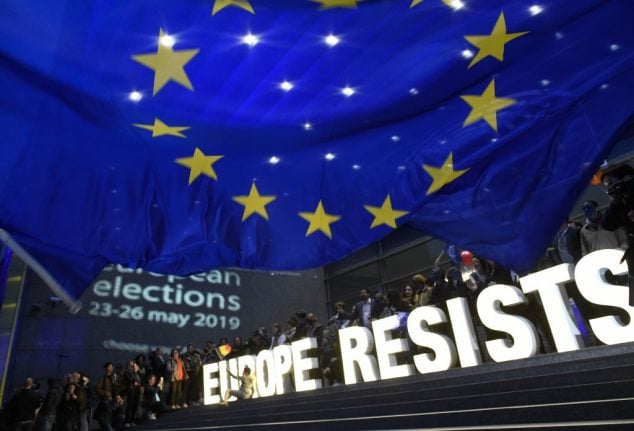 In Italy Matteo Salvini's far-right League is also expected to poll well, and exit polls have indicated the Flemish far-right is set for a strong showing in Belgium.

Germany's far-right AfD was set to improve on their 2014 score of 7.1 percent, with exit polls seeing it coming in at 10.5 percent. Before the vote, EU officials feared the far-right could win 200 of the 751 seats and Le Pen's National Rally called Sunday for the formation of a “powerful group” in the European Parliament.

But observers doubt the populists' ability to form an effective coalition, and the mainstream centrist blocs could welcome liberal and Green members into a broader alliance to contain the threat.

Environmentalist political parties performed strongly across Europe, reflecting how the issue of climate change has leapt up the agenda as young activists take up the cause.

In Germany, the Greens were on course to knock the centre-left SPD, the coalition partner of Chancellor Angela Merkel, from second place. The exit polls also showed the French green party EEVL led by a former top figure at Greenpeace France making strong gains with a score of 12-12.7 percent compared with 8.9 percent in the last EU elections in 2014.

Through school strikes, civil disobedience and large-scale marches, the movements have succeeded in highlighting how human behaviour threatens the future of the planet.

Macron had made no secret of the significance he attached to the results and his party's performance is likely to be seen as a major setback for the president two years into his five year mandate.

But the Elysee sought to put a brave face on the indications, saying that the performance was “respectable” after reports indicated that a bad showing could lead to a cabinet reshuffle. The night was no better for Merkel, as exit polls showed the list of her centre-right bloc was due to only garner around 28 percent.

However, one EU leader sitting happily was Hungary's nationalist Prime Minister Viktor Orban, whose Fidesz party exit polls showed was on course for a big victory.

After fears ahead of the election that voters would stay away, turnout across the European Union excluding Britain was estimated at 51 percent, the highest in 20 years, the EU parliament said.

In the first election to the European Parliament in 1979, 62 percent of eligible voters cast a ballot in what were then nine member states.

Since then the number of members has swollen to 28, but turnout has fallen every five years, to just over 42 percent in 2014.

Since the last European elections, British voters have decided to quit the EU altogether, and this week's polls might be the last for UK parties.

Brexit day itself has been postponed, triggering a crisis for Prime Minister Theresa May's government, and Nigel Farage's Brexit Party is expected to do well. The announcement of the results for Britain will come as the ruling Conservative Party braces for a leadership contest to replace May after she announced she was stepping down on Friday.

Among the frontrunners are figures like former foreign secretary Boris Johnson who are passionate supporters of Brexit.

This in turn, along with the performance of pro-EU parties, will influence the debate in the other EU capitals about whether to accord Britain another Brexit extension.