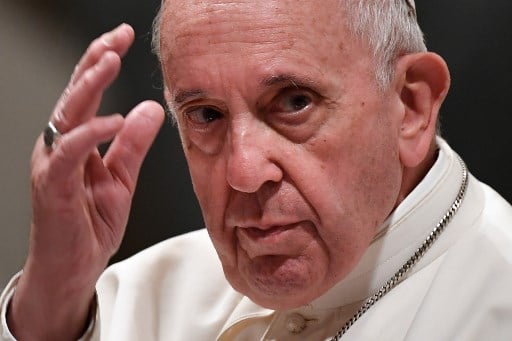 “The signs of meanness we see around us heighten our fear of 'the other', the unknown, the marginalised, the foreigner,” he said on Monday in a message for the World Day of Migrants and Refugees.

“It is not just about them, but about all of us, and about the present and future of the human family.

“Migrants, especially those who are most vulnerable, help us to read the 'signs of the times',” he said.

Nationalist forces from Marine Le Pen in France to Matteo Salvini in Italy and Nigel Farage in Britain boasted significant gains in the EU parliament elections which wound up on Sunday.

Salvini's far-right League party did particularly well in Italy in centres seen as migrant “hot spots”, including a town held up by the left as a model of tolerance and integration.

Salvini sparked an outcry at a rally in the run-up to the vote by holding aloft a rosary seen by many as a gratuitous prop, and calling for the Virgin Mary to carry him to victory.

Francis acknowledged the “fear” in many societies towards migrants and refugees arriving in search of protection or a better future.

“To some extent, the fear is legitimate, also because the preparation for this encounter is lacking,” he said, alluding to often piecemeal and inadequate approaches to refugee integration.

“But the problem is not that we have doubts and fears. The problem is when they condition our way of thinking and acting to the point of making us intolerant, closed and perhaps even – without realising it – racist,” he added.

“Today's world is increasingly becoming more elitist and cruel towards the excluded,” the Argentinian said in his message titled “It is not just about migrants”.

Wars only affect some regions of the world, yet weapons of war are produced and sold in other regions which are then unwilling to take in the refugees produced by these conflicts,” he added.

The next World Day of Migrants and Refugees is not until September 29, but the Vatican sends out papal messages on such subjects well in advance to provide guidance to pastors around the world.