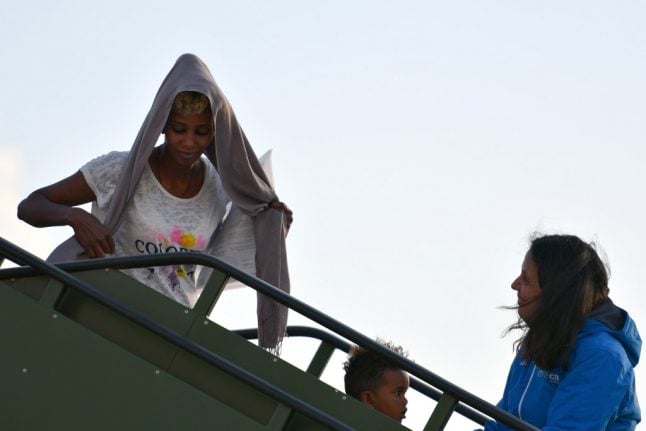 A previous airlift from Libya to Italy in April. Photo: Alberto Pizzoli/AFP

“Due to the violent clashes and deteriorating security conditions in Tripoli, 149 refugees and vulnerable asylum seekers were evacuated and transferred to Rome,” the United Nations High Commissioner for Refugees (UNHCR) said.

Those airlifted to safety — including a two-month-old infant — came from Eritrea, Somalia, Sudan and Ethiopia, it said.

“After months spent in desperate conditions in detention centres”, and trapped by renewed fighting in the North African country, many were suffering from malnutrition or needed medical attention, UNHCR said. “Other evacuation operations are needed,” the UNHCR mission head in Libya, Jean-Paul Cavalieri, was quoted as saying. “These operations represent a lifeline for refugees, for whom the only way to escape is to entrust their lives to unscrupulous traffickers in order to cross the Mediterranean,” he said.

Earlier this week, 62 people from Syria, Sudan and Somalia were evacuated from Tripoli to the UNHCR Emergency Transit Centre in Timisoara, Romania, where they were to receive medical care before going on to Norway.

The UN agency said it was grateful to states that have offered evacuation opportunities, but warned that “at present the number of new detainees is increasing much faster than the number of those being evacuated”.

Nearly 1,000 people have been evacuated from Libya or resettled so far in 2019, while in May alone more than 1,200 people were returned by the Libyan coast guard after being intercepted trying to cross the Mediterranean, it said.

Clashes between rival forces in Libya and heavy bombardments have forced more than 83,000 Libyans to flee their homes since the start of April, according to the UN. More than 2,400 have also been wounded, while 100,000 people are feared trapped by the clashes raging on the outskirts of Tripoli, according to the World Health Organization.