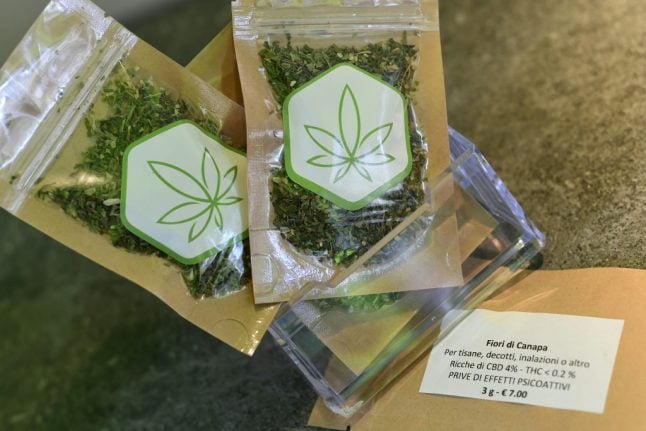 What does the law say?

In a ruling on Thursday, the Court of Cassation said that selling derivatives of cannabis sativa – notably oils, resins, buds and leaves – is illegal in Italy. Only certain “agricultural” varieties are permitted under a December 2016 law that was designed to help Italian farmers grow industrial hemp, the highest court of appeal said.

Its decision aimed to close a loophole in the legislation that left the door open to the marketing of so-called cannabis light, strains that contain less than 0.2 percent of THC, the compound that produces mind-altering effects. So long as the THC content is below this threshold – and so long as it doesn't end up as anything that can be eaten or smoked – the 2016 law said cultivators could grow cannabis light without any special permission.

But the ruling states that selling cannabis derivatives is a crime “unless they are effectively devoid of narcotic effects”. It's not clear whether that definition applies to the low-THC varieties currently on sale all over Italy.

Ever since the 2016 law passed, shops, delivery services and even vending machines have sprung up selling everything from seeds to shampoos.

Since buds, flowers and leaves could potentially be eaten or smoked, as prohibited by the law, they are marketed as “collector's items” (wink wink) and labelled as unsuitable for human consumption. Seeds are not supposed to be cultivated.

Shops also sell a number of “cannabis-flavoured” consumables, including soft drinks, infusions, candies and biscuits, that contain only fragrances or CBD, the substance in cannabis that has been claimed to have relaxing or pain-relieving properties but won't get you high. The court did not say that selling such products was illegal.

The wide variety of other paraphernalia typically found in legal weed shops, including cosmetics, crystals and clothing, are not affected by the latest ruling either. Drinks for sale at a cannabis light shop in Milan. Photo: Miguel Medina/AFP

Will such shops have to close?

In theory, the ruling means that police could begin seizing cannabis sativa derivatives and charge the shops selling them.

The application of the law remains unclear, however, and since most shops sell a range of products not listed by the judges, there's nothing to stop them continue to sell their other merchandise – so long as it's profitable enough.

But shop owners are understandably worried. One businessman in Sanremo has already announced plans to launch a class action against the court's ruling, which he fears could put him and others in the sector out of business overnight.

“It's like cracking down on alcoholism by banning alcohol-free beer,” he told the press.

People who buy cannabis derivatives, meanwhile, are not in danger of being prosecuted.

Is a further crackdown likely?

Interior Minister Matteo Salvini, head of the hard-right League party, recently declared “war” on cannabis light shops, which he classes alongside drug dealers. He praised police for closing a handful of stores earlier this month – though now that the European elections are over and he's no longer in campaign mode, he might drop the tough talk.

“I'm sorry for the jobs [lost], which I hope can be recovered elsewhere. But it sends a clear message and clarifies something obvious: drugs are dangerous and there are other ways to have fun,” Salvini commented after the court's ruling. 'I'm not a criminal for smoking natural': protesters turned out in Rome earlier this month after Salvini declared his war on cannabis light. Photo: Filippo Monteforte/AFP

The other party in Italy's coalition government, the anti-establishment Five Star Movement, is far more favourable towards cannabis light, which is says has helped boost small- and medium-enterprises in Italy.

There are thought to be around 2,000 agricultural businesses in Italy cultivating 4,000 hectares of hemp or cannabis varieties, according to farmers' association Coldiretti. The sector was worth an estimated €150 million in 2018.

What about regular cannabis?

Italy legalized medical marijuana in 2013. You must have a doctor's prescription and obtain the drug from a licensed pharmacy, which has permission either to buy it from a tightly controlled supply grown by the Italian army or import it from regulated growers outside Italy.

READ ALSO: Marijuana, made in Italy: Inside the military police cannabis lab

Growing or selling marijuana for recreational use is illegal and can land you in prison. Possession is not a crime, but it remains punishable by a fine and the suspension of your driving licence and/or passport.