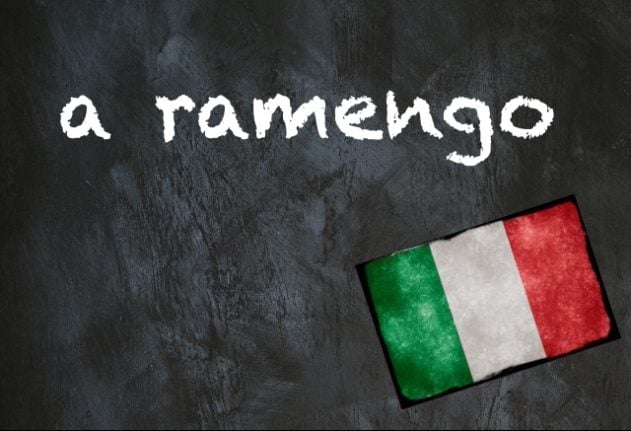 I’d never heard of a ramengo until a reader wrote in to ask what it meant. A quick search revealed two things: 1) Aramengo is a small town in Piedmont, and 2) no one seems to want to go there.

I should clarify that Aramengo looks perfectly charming. But what my Googling turned up was that the phrase andare a ramengo (‘to go to ramengo‘) means ‘to go to ruin’, ‘to fall apart’, ‘to go pear-shaped’.

Why should poor old Aramengo be associated with rack and ruin?

The most prevalent theory seems to be that back in the days when Piedmont was ruled by Lombard dukes, those convicted of crimes – especially failing to pay back their debts – would be exiled to the far reaches of the realm, which in the Middle Ages lay… right around Aramengo. Thus the town, the story goes, became a synonym for bankruptcy.

All that could be an urban legend: others say ramengo actually comes from the verb ramingare, ‘to wander’ or ‘to roam’.

Andare ramingo is a somewhat literary way of saying ‘to go roving’ and linguists believe ramengo is simply the Venetian dialect version, a variant that has come to mean, by extension, to go off course or awry, to find yourself an exile or vagabond.

Our reader confirms that her grandparents spoke Venetian, while a Milanese friend of mine tells me the expression is used all over the north.

As well as a description, you can also use the phrase as a command: it’s a kind of curse when you want to wish someone trouble.

May you never go to ramengo – but I hear Aramengo’s lovely this time of year.