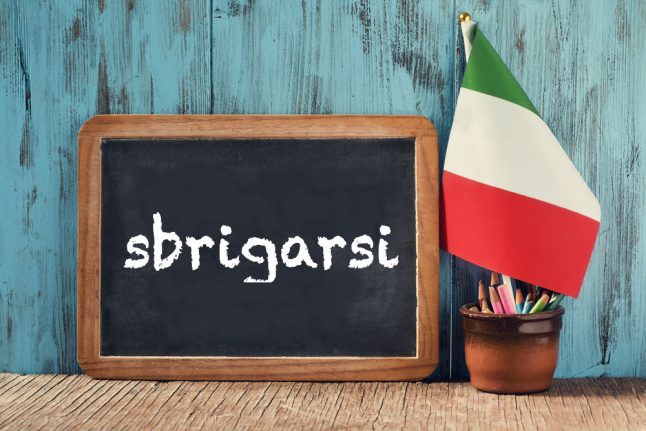 This useful word was requested by one of our readers, who has a very particular someone she needs to get to 'hurry up'.

“My dog, Sawyer, and I are learning Italian together and I am always telling him 'Sbrigatevi' in the morning when I need to get to work and all he wants to do is roll around in the grass and chase bugs,” writes Kim Antonio from Connecticut in the US.

“Since my dog does not listen to me in the morning anyway it is not too late to teach him the correct Italian term for 'hurry up and get your fuzzy little butt in this house immediately!'”

Kim wanted to check if she was using the right word, to which the answer is: yes and no. Sbrigarsi is indeed the verb 'to hurry up', but to command just one person (or dog) to do so requires the second person singular imperative: sbrigati (pronounced “ssbri-ga-ti”).

Sbrigatevi (“ssbri-ga-te-vi”) is what you'd say to a whole pack of dogs, while sbrighiamoci (“ssbri-gee-ah-mo-chee”) is what Kim can tell Sawyer if they're both running late: 'let's hurry'.

Non discutere e sbrigatevi!
Don't argue and hurry yourselves up!

Sbrigarsi is a reflexive verb (literally 'to hurry oneself'), that's why you need to conjugate the extra reflexive pronoun (ti, vi, ci). If you were just using to describe someone hurrying – for instance mi sbrigo, 'I'm hurrying' – that pronoun would go in front, but as with all reflexive verbs, in the command form it's tacked onto the end.

But if you hear someone saying sbrigare, they haven't just forgotten the pronoun: it's a different form of the verb with a slightly different meaning. The non-reflexive version means 'to deal with' or 'to get done'.

It might be a chore you need to take care of…

… or a person who needs seeing to.

Sbrigo in pochi minuti questo cliente e sono da te.
I'll soon take care of this client and I'll be right with you.

It comes from the word briga, 'trouble' or 'hassle', combined with the s~ that in Italian can turn something into its opposite (think of it like the prefix 'dis~' in English). In other words, sbrigare literally means 'to de-trouble'.

In fact, the noun disbrigo means the 'handling' or 'carrying out' of some kind of task.

… which is another way that Kim, if she's feeling very formal, might tell Sawyer to hurry up and do his business in the morning.