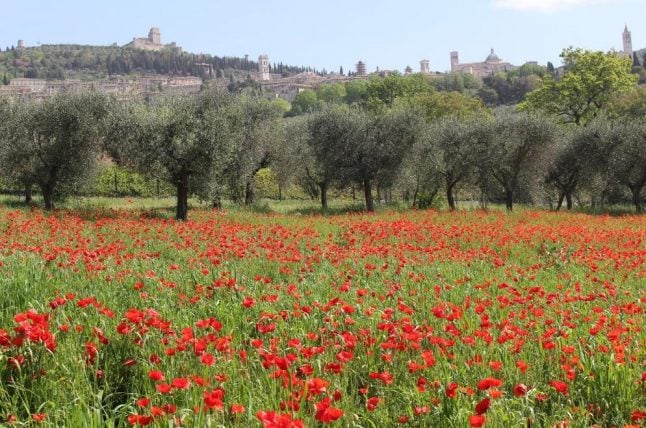 Poppy fields below Assisi, one of the stops on a bike route through the Umbrian countryside. Photo: Jeff Wilson

When St Francis renounced his worldly possessions and left in quest of spiritual purity, befriending wolves and other animals along the way, it's a mystery whether he was receiving the words of Christ or acting on symptoms of PTSD caused by battle and imprisonment.

What's not a mystery is why St Francis felt such a strong connection to nature in his native Umbria. The same goes for Alessandro, our host at Le Mandrie di San Paolo, the agriturismo where my wife and I stayed during our visit to the region, which lies tucked quietly next to Tuscany.

Although it does not have the international name recognition of its neighbour, charming Umbria certainly deserves it. Umbria is famed for its rolling green hills and valleys. Photo: Tiziana Fabi/AFP

To my knowledge, Alessandro is not a wolf tamer, but his shepherd-mix dog is an undeniably likeable presence around the farmhouse turned restaurant atop a hill dressed in olive trees. He spends most of the day sleeping in the back of his owner’s truck until dinner time, when he moseys around the tables, discreetly charming the diners.

He is a reminder that you’re at an agriturismo, a uniquely Italian accommodation that can feel more like staying with a friend who happens to own a farm than at a hotel. The term translates loosely into “farm stay” and is perhaps the best way to enjoy the Italian countryside.

Alessandro exudes a simple tranquility that seems to come from a deep connection to nature. His family produces nearly all of the products sold and served, including olive oil, cheese, bread, legumes, and wine.

READ ALSO: How an American opened his own Umbrian winery

It all contributes to the perfect end to a day of cycling, which is what my wife and I came to Umbria to do. We are not Tour de France-inspired cyclists. We just like to earn a good meal while soaking in some colourful views.

The Assisi-Spoleto bike path is a user-friendly route that can be enjoyed by cyclists of any level. The 50-kilometre route winds along the foothills of the Apennine Mountains between the small cities of Assisi and Spoleto, also taking in less touristy villages that still adhere to centuries-old traditions.

At just about any moment during your ride, Umbria's natural beauty and rich history is on display. You can begin by appreciating the poppy fields below the hill-top city of Assisi while you check the air in your tires, then head south toward Spoleto. After 15 kilometres, stop in the village of Cannara, located in the centre of the Umbrian valley. Bar del Centro in Piazza Corte Vecchia is a good spot to get an espresso and appreciate the slow vibe of the town.

Depending on your conditioning, you can continue to Spoleto and refuel with a meat and cheese plate washed down with artisanal beer or wine at Degustibus. On your way out, check out the Roman theatre dating back to the 1st century AD and the archaeological museum for the history of the town.

Ponte delle Torri, a Roman bridge-aqueduct that measures 80 meters high and 230 meters long, is another highlight. It was originally built in the years 200-300 and links the the city to a thick and ancient forest, which is also worth a visit. Or you can save Spoleto for another day, and head back north for a climb up into Assisi. Caffè La Selva is an ideal spot to reward your efforts with another coffee and a view of the Basilica of St Francis, as well as the valley below featuring the multiple Umbrian shades of green.

The city of Assisi absorbs a lot of tourists but manages to retain a lot of charm. One particularly appealing spot is Bibenda, just off the main drag, where you can settle in for a glass of wine and toast soaked in local olive oil. While the Assisi-Spoleto bike route allows you to ride beside farms, river banks and wildflowers, the return to Le Mandrie di San Paolo offers a bird’s eye view of these sights. You can step outside your door amid the olive trees and listen to the bees buzzing in the tangle of flowers clinging onto the ledge that descends into the valley below.

When hunger nudges its nose into your tranquility, make your way up to the main roost, where an open fireplace warmly illuminates the wood-clad dining room. The homemade pasta with truffles and mushrooms does not disappoint. If you are feeling especially protein-deprived from your ride, you may want to order the strips of steak with sea salt and rosemary, which you can watch being prepared by the ‘grill man’ working the open flame area next to the fireplace.

And if you drain your bottle of house red before finishing your meal, Alessandro may plunk a complimentary carafe down on your table before you even notice, for better or worse. I suspect better, though. Alessandro knows. His dog does too. And I suspect St Francis would approve as well. Jeff Wilson is an American-born teacher, traveller and writer who lives in Milan. Follow him on Twitter @surfbanjo.