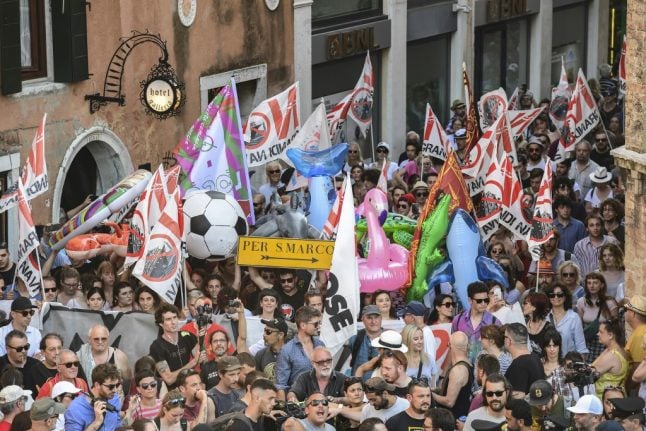 People hold flags and banners during a demonstration called by the No Great Ships movement on Saturday. Photo: MIGUEL MEDINA / AFP
According to Italian media, around 5,000 demonstrators marched through the city carrying banners with slogans such as “Keep large boats out of the lagoon”.
“These giants must leave the lagoon. They're incompatible with the delicate balance of the ecosystem and dangerous for the city,” the president of the local municipality of Marghera, Gianfranco Bettin, was quoted as saying.
READ ALSO:
The demonstration was organised by a group called “No Big Ships” following an incident last Sunday in which the 13-deck MSC Opera suffered an engine failure, scraped along the dockside and knocked into a luxury tourist boat. Four tourists were slightly injured in the accident at San Basilio-Zattere in Venice's Giudecca Canal.
Amateur footage of the incident was posted on social media, sparking a fresh controversy over the damage the mammoth vessels cause to one of the world's most famous cities, which along with its lagoon, canals, bell towers and bridges is a UNESCO World Heritage site.
Critics say the waves the ships create are eroding the foundations of the lagoon city, which regularly floods, leaving iconic sites such as Saint Mark's Square underwater.
READ ALSO: Venice's gondoleering goddesses teach ancient art to the masses