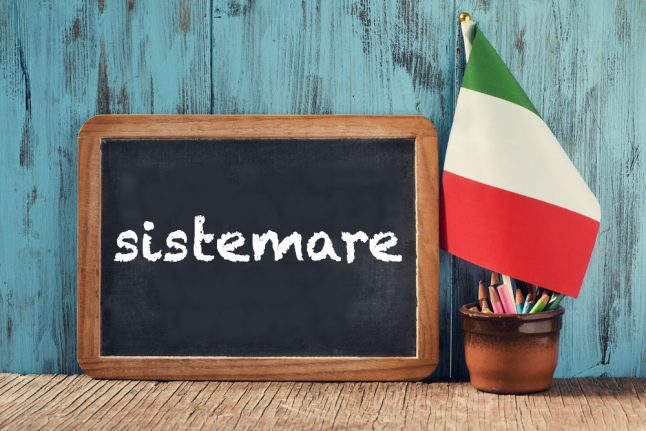 There are few things more gratifying than the feeling of having got everything in order (even if, as anyone who lives in Italy can tell you, it probably won't stay that way for long).

“Ho sistemato tutto!”, you'll be entitled to declare in triumph upon, for instance, finally obtaining your permesso di soggiorno – just in time to start the process of renewing it all over again.

Sistemare means 'to sort out', 'to put in order' or 'to arrange', whether it's pesky things like documents or more abstract problems.

Ha sistemato tutti i libri sullo scaffale.
He arranged all the books on the shelf.

That's easy enough: it sounds like 'systematize', our own (much less common) verb for organizing things into some kind of established order.

But there's a couple of other meanings to sistemare that might come as a bit more of a surprise. It can also mean 'to put somebody up', as in, provide somewhere to stay…

L'abbiamo sistemato nella camera degli ospiti.
We put him up in the guest room.

La direttrice ha sistemato nell'azienda tutti i suoi parenti.
The director set up all her relatives with jobs in the company.

Aveva quattro figli e li ha sistemati tutti e quattro.
She had four sons and married off all four of them.

You can even threaten to sistemare someone who's misbehaving, a bit like offering to 'straighten them out' in English.

Se non studi, ti sistemo io!
If you don't study, I'll give you what for!

If you think about it, all these uses are just different ways of 'sorting people out', the same way you'd tackle a particularly messy filing cabinet.

Just remember that it matters who's doing the sorting. If someone else is taking care of something for you, use plain sistemare; but if you're looking after business on your own, the verb becomes reflexive: sistemarsi.

Ci siamo sistemati in campagna.
We settled (ourselves) down in the countryside.

Si è sistemata presso una compagnia di assicurazione.
She got (herself) a job with an insurance company.

You'll encounter the reflexive form especially when you're performing some kind of 'sorting out' action on yourself, like tidying your hair or clothes.

Prima di uscire, sistemati la cravatta!
Fix your tie before you go out!

But you can also use sistemarsi when neither you nor anyone else is sorting things out: for those wonderful times when they sort themselves out on their own.