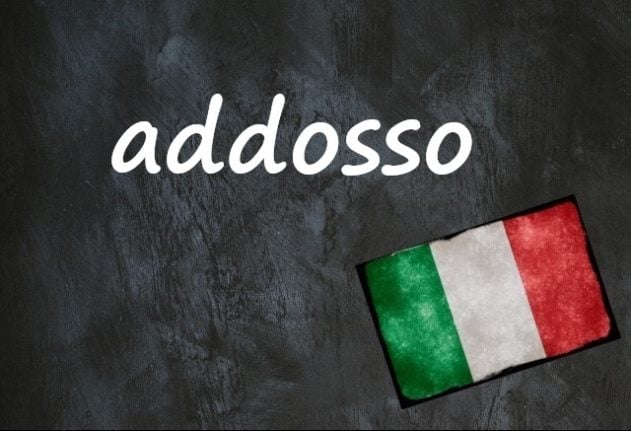 Summer is well and truly here in Italy, and if you’re really feeling the heat you could say:

– L’estate addosso
– Summer is upon us

As Italian singer Jovanotti shows us in the song L’estate addosso, this phrase doesn’t simply describe the changing of the seasons.

In the song, he’s also describing the weight (and heat) of summer being ‘on top of’ him. He feels it weighing on him.

Addosso is a particularly expressive preposition that has no direct translation into English.

It can be used used literally, or in a more abstract way, to mean something is close in terms of either space or time.

It can mean right on top of you, or close enough to be breathing down your neck.

– Gli è caduto l’albero addosso.
– The tree fell right on top of him.

It can mean that you feel something very strongly, or have a particularly vivid memory of something.

– Sometimes I can still feel this bad experience inside of me.

This slightly peculiar word comes from dosso, a rather outdated term for the back, or spine. Dosso today might be used to talk about a small hill or bump in the road.

But more usually, dosso is used along with a preposition to be transformed into a compound preposition or adverb, like addosso.

There’s also di dosso, which is kind of the opposite. It literally means “off your back” but is most often used to mean “to remove”, much like the verb togliere.

– Toglimi le mani di dosso.
– Take your hands off me.

There’s a related verb, addossare, which isn’t very common in normal conversation, but means something like “to lay on”, or “to lean on”. It’s used when talking about blame or responsibility:

– addossare la colpa
– to lay the blame (on something/someone)

And there’s also indossare, a verb meaning “to put on” – literally “to put on one’s back”.

– She put the dress on

When you consider the meanings of these related words, it becomes clear what Jovanotti meant about summer “weighing” on him.

And if you’re experiencing Italy’s heatwave at the moment, you’ll already know exactly what he’s talking about.