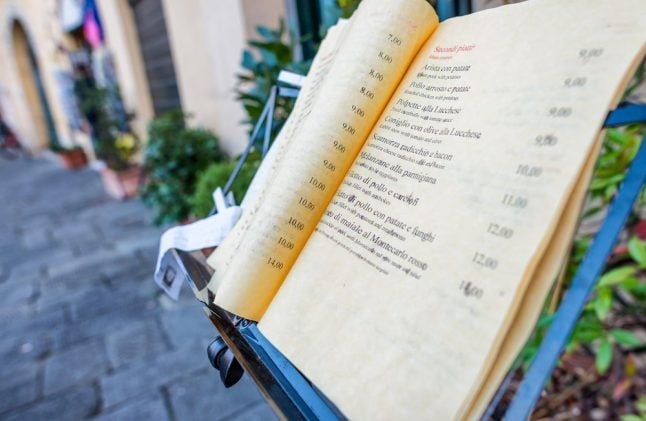 Always ask to see the menu - in Italian as well as English - before sitting down at a restaurant. Photo: Depositphotos

Restaurants in Italy regularly hit the headlines for ripping off tourists. Most recently, we reported how a cafe in Rome charged more than €80 for a couple of burgers and coffees.

Sadly such tales of woe are not unusual. As in many countries, establishments in Italy's tourist hotspots are notorious for finding ways to scam or overcharge visitors.

Other headline-grabbing rip-offs have included a €1,100 meal for four at a restaurant in Venice, a single cone of ice cream that cost €25 in Florence, and a €42 check for three gelati and some water near the Trevi Fountain in Rome. Stopping for coffee in a tourist hotspot could land you with a hair-raising bill. Photo: Gabriel Bouys/AFP

After the latest report, readers wrote in to tell us their own horror stories and give their advice – some of it learned the hard way – on avoiding Italy's prolific rip-off merchants.

Louise Mead from the UK recently visited Italy for the first time and encountered a string of unscrupulous businesses intent on overcharging people.

When ordering wine with a meal, she says, she was “told it was out of stock and only more expensive wine was available.” Another day she “ordered a carafe of wine and the waiter charged for two half carafes, which was more expensive.”

She was also charged 13 euros for two medium beers, and short-changed when paying for a takeaway coffee.

She warns of other tourist-trap restaurant pitfalls like “poor quality restaurant food that's cheaply produced” such as lasagne that came with no meat in it, and “staff upselling extras as if they were freebies then charging for them, such as water and limoncello.” It pays to get restaurant recommendations from locals. Photo: Depositphotos

While unscrupulous types may find it easy to prey on visitors who are unfamiliar with the country, even those who know Italy well and speak the language have had bad experiences.

“Sometimes establishments advertise they take credit cards, but when you go to pay with one they tell you the machine is broken,” says Lindsay Sinko, a Florida-based travel agent at Passion for Italy Travel.

“My husband and I both speak Italian, which helps us avoid a lot of issues, but this happened to us.”

“On our last night in Milan we’d spent all our euros, not wanting to take them home, and were just trying to have a quick pizza before bed. The waiter made my husband leave me sitting there while he went to get more euros out of an atm.”

“Meanwhile, they “gave” us limoncello shots, but then they appeared on the bill. When we asked about it, the waiter said we enjoyed them, didn’t we? So we shouldn’t mind paying.”

“The whole place didn’t feel right from the get-go and we should have known better,” she says. “Don’t get so hungry or tired you ignore your instincts. Ask for recommendations and take them, and you’ll usually avoid these situations.”

And it can happen to those who live here, too.

“I'm not a tourist. I've moved here permanently. It doesn't matter.” says Mary Anne Della Fera, who lives in Abruzzo. “In many cases, Americans will be charged more for something than Italians.”

“If you're in a tourist area and prices are not posted, assume that you're being charged more than Italians are,” she says.

“In fact, my American-Italian friend who has been here 15 years said the SHE charges Americans more than she charges Italians for the same service.” Crowds at the Spanish Steps in Rome. Photo: Depositphotos.

And even Italians themselves can be caught unaware while travelling in the country.

Paolo Treccani from Brescia had a very expensive breakfast in a Florence cafe because he didn't realise “the cost of everything was doubled if you have it at the table.”

While it's not a scam, most people don't realise that in some Italian cities locals will often have coffee or even breakfast while standing at the bar, and things can get much more expensive if you sit down.

“Still, it was written on the menu, so I paid too much for a breakfast because I had been naive,” he admits. In general, he says, “always ask for the menu (one Italian and one in your language to compare prices). If anything doesn't seem right, leave.”

This isn't the only kind of unexpected (but legitimate) extra cost which many people think is a rip-off.

“The cafes in St. Mark’s Square in Venice have high prices due to their historic locations and at night charge entertainment fees,” explains Lindsay. “I’ve always found the entertainment quite worth the fee. Just don’t eat a full meal there, go for a drink or dessert instead and accept that you’re paying for a special experience.”

And while speaking Italian might not always be enough to save you from being overcharged, it can certainly help you spot the scammers – and tell them off, as Tracy Vidler tells us.

“My friend, her mum and myself were ordering sandwiches for lunch in a cafe. The young girl behind the till asked the other girl working there “how much should I charge them?” in Italian.”

“What she didn't know is although I'm Australian, I speak very good Italian so my ears pricked up when I heard her ask as the prices were clearly marked on the menu. “

“The other young lady working there said “charge them more because they're American.” I then informed her in Italian that we weren't American, we were Australian, and that she could cancel our order.”

“She was very embarrassed but I bet she did it all day every day to tourists,” she says.

Tracy warns visitors to check their change and to watch out for vendors “saying you gave them €5 when you have them €20.”

But while most of the problems seem to be with unscrupulous restaurants and cafes, Lindsay and Emma warn that there are plenty of other ways to be parted with your money in Italy. Always pay attention to what's going on around you – and be careful where you keep your money. Photo: Depositphotos

And you need to be on your guard as soon as you arrive in an Italian city, as Lindsay explains. “The first thing is to watch out when coming out of train stations and even airports is for people offering you a “taxi”.

“Official metered taxis line up at stands outside, and these are almost always dishonest people without a taxi license hoping to take you for a ride in more ways than one,” she says.

But it's easy not to get caught out: “Lines move quickly, stand in them,” she says. “Take a metered taxi.”

What can you do if you get ripped off in Italy?

In some cases, angry customers have been reimbursed after complaining (or asking their tour guide to complain) to the police, or after shaming rogue establishments in the media.

Italy's financial police can hand out fines to businesses that don't clearly and accurately display their prices, or to those that don't give customers a receipt.

But of course, the best thing is to try and avoid getting stung in the first place.

How to avoid being ripped off

The first rule of finding a good restaurant anywhere in the world is always to be wary of establishments directly next to big tourist attractions or those where touts try to hustle you inside.

“As a general rule of thumb, avoid the places where people are begging you to sit down in English and have English signs advertising the likes of fettuccine Alfredo,” says Lindsay. “Great places don’t have to cater to tourists.”

Always take a look at the menu before sitting down. Even better, ask for local recommendations ahead of time and do your research online.

When it comes to general safety, be careful and take your time, Mary Anne advises. “No matter how much Italians try to rush you and intimidate you to get out of their way, slow down and take as much time as you need to put your money away, secure your luggage or bags, lock your car, etc.”

And the best way to avoid getting ripped off, she says, is to “make sure you're with an Italian!”

Almost everyone who wrote in says that the most important thing is simply to stay alert.

“Be very aware of everyone and everything around you,” says Tracy. “Pickpockets don't always look homeless. I watched a guy at the Trevi fountain pickpocketing tourists and he was dressed head to toe in Gucci.”

Richard Lewis Vine, in Novara, warns: “Don't wear expensive jewellery or clothes in crowded or poor areas. Don't read your map or messages while walking. Don't be tempted by “bargains”. Stay aware, be smart, have fun.”

And Bill Palmer, a frequent visitor to Italy from the UK, suggests “using Google maps connected to earbuds, to avoid having your phone in your hand when navigating. And don't dither around rail or metro stations.”

Taking basic precautions should be enough to make sure your trip to Italy is trouble-free. As Bill points out: “All this advice is as valid in London or Paris as Rome.”

What do you think? Have you ever been ripped off in Italy? Members can log in to leave a comment below.