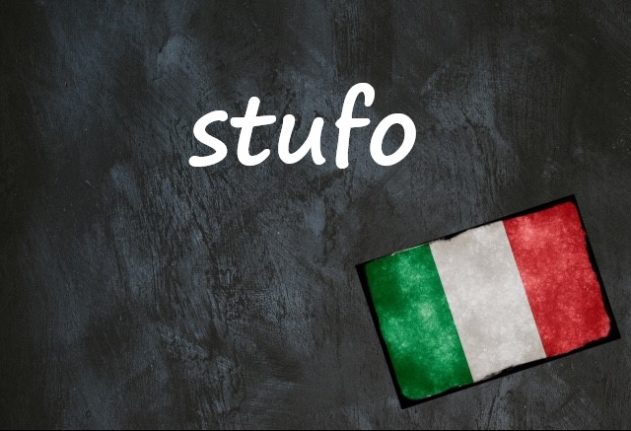 Today’s word is the verbal equivalent of this:

Because you can’t sigh in frustration all the time, Italian has a word for it: stufo (masculine) or stufa (feminine), the feeling of being ‘fed up’ or ‘sick and tired’.

You practically exhale it in exasperation: “stoof-oh”, with the stress on the first syllable.

And to say you’re sick ‘of’ something, just add di + the relevant verb in the infinitive.

Sono stufi di vivere in città.
They’re sick of living in the city.

Me ne sono andato perché ero stufo di aspettarti.
I left because I was tired of waiting for you.

The adjective comes from the verb stufare, which the cooks among you might have already encountered in your Italian recipe books: in a culinary context, it means ‘to stew’. And you might spot uno stufato on a menu, which refers to the end result: ‘a stew’.

But the verb has also acquired a figurative meaning, namely ‘to bore’ until you’ve really had enough. I like to imagine it as slowly bringing someone to their boiling point.

Mi hai proprio stufato!
I’m sick to death of you!

Sei già stufa?
Are you fed up already?

Sono stufo di te.
I’ve had enough of you.