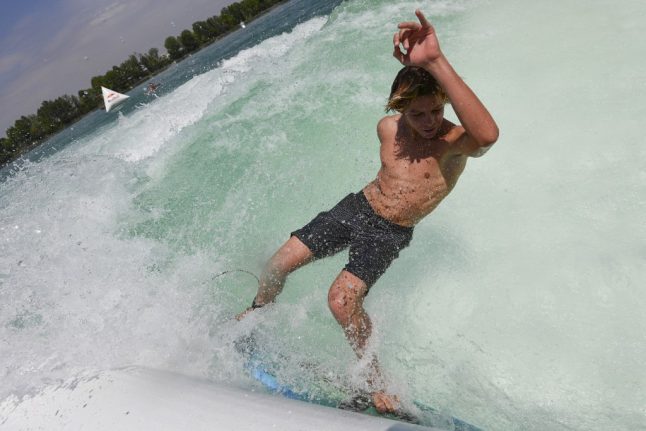 Wakeparadise, which opens to the public on Saturday, is the first such park in Italy and joins a growing list of artificial lagoons in Australia, Dubai, Malaysia, Spain and the United States.

The Snowdonia Surf Park in Wales boasts the world's longest artificial wave on its 300-metre (980-feet) lagoon, using a plough and pulley system to create its waves.

Set in Peschiera Borromeo, in a picturesque artificial lake surrounded by trees, it offers 10-metre wide wave, with a maximum height of 1.6 metres. Purists have criticised the creation of lagoons that commercialise the sport and remove the element of unpredictability oceans bring, which they argue undermines its free spirit.

But others appreciate the chance to train all year round.

Vanoli, a keen surfer himself, agrees the experience “cannot be compared to the ocean”.

“No artificial wave structure can offer the emotion and feeling of the sea”, he said.

But “we can give novices the opportunity to approach this sport in a simple, immediate and safe way”.

And for those already professional at paddling and cresting, the centre gives them “the chance to surf in their lunch break, or after work… or when the sea is flat,” he said.

The force and waveform can be adjusted to match the surfer's abilities. Once wetsuits are donned and boards waxed, there are three types of waves available: a gentle one for beginners, a slightly more vertical, medium wave for those with some experience, and a powerful breaker.

Fifteen pumps inject 22,000 litres of lake water per second into the pool.

“It's fantastic, a super wave… so big. I surfed it a couple of times and I'm still getting my bearings. But it's really fun,” surfer Andrew Holzner says.

Laura Haustein, a 21-year-old German, said it was certainly “a good option for beginners, and a good way to improve”.

“There's a constant wave, the pressure is always the same. The wave's clean, there's no shock,” she said, her board tucked under her arm. Surfers, who can use their own board or rent one, will pay 45 euros an hour to ride the waves, or can book the whole pool for private use for 420 euros an hour.

The site, which is open to anyone over 12 years old, offers training courses too.

There are some 80,000 surfers in Italy, with 35 percent living in Lombardy — the northern region that includes Milan — and 60 percent are beginners, according to Wakeparadise.

The park also hopes to attract tourists keen for a break from the dusty streets of Italy's economic and fashion heartland.

Interest is certainly on the rise in the sport, which will make its debut appearance in the 2020 Summer Olympics in Tokyo.