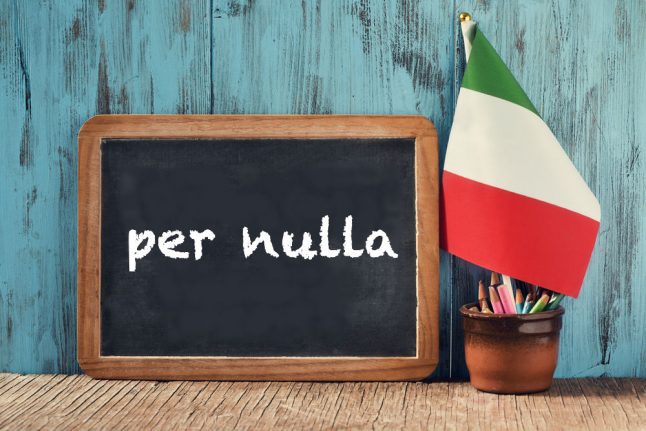 How do you say no, nope, negative, not on your life, not in the least, not at all, not one bit?

In Italian there are various ways – many of them non-verbal – but let's look at a particularly useful phrase: per nulla.

It means, literally, 'for nothing': nulla is just another way of saying niente, 'nothing'. But usually when you add per – and you can also say per niente in much the same way, if you prefer – it becomes the equivalent of 'not at all', 'not one bit'.

You can use it to give an emphatic 'no!' (as above), or add it to a negative statement to underline just how much you really mean that 'not' – like saying 'not in the least'.

Questo posto non mi piace per nulla.
I don't like this place at all.

Non è vero per nulla.
That's not true in the least.

While it's particularly emphatic at the end of a sentence, it doesn't have to go there. You can just as well put it before whatever you're saying isn't the case – usually an adjective – which changes the tone to a more measured 'by no means'.

La domanda non è per nulla nuova.
The question is by no means new.

Sarà un'impresa difficile ma per nulla impossibile.
It will be a difficult undertaking, but by no means impossible.

And then there are times when per nulla does actually mean 'for nothing', usually in the much same ways we'd say it in English.

Non per nulla la chiamano la Città Eterna.
Not for nothing is it called the Eternal City.

Te lo cedo per nulla.
I'll give it to you for nothing (i.e. cheaply or free).

Non me lo perderei per nulla al mondo.
I wouldn't miss it for (anything in) the world.