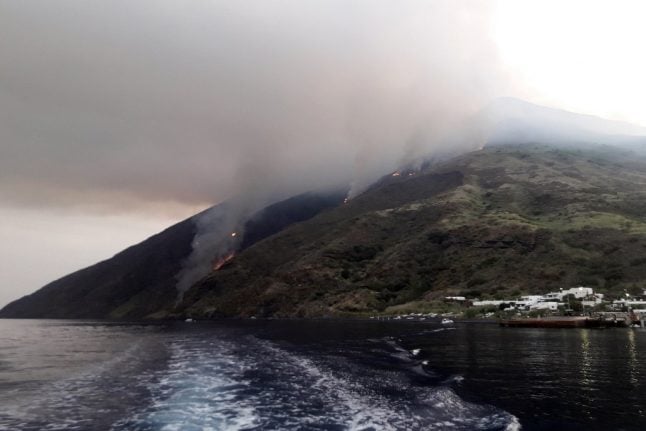 The volcano is known to be active, but on Wednesday there were two particularly powerful explosions.

“Unfortunately one man is dead, there are a few injured, but none seriously,” emergency worker Calogero Foti told RAI television.

The dead man was a 35-year-old from Messina in Sicily who was walking with a Brazilian companion who was found dehydrated and in a state of shock, the AGI news agency reported.

They were walking below the 400 metre altitude limit above which a guide is required. A view of the explosion captured by Twitter user Fiona Carter. Photo: @FionaCarter/AFP

A navy boat has been sent to the 12 square kilometre island for a possible mass evacuation, with 70 inhabitants and tourists already evacuated.

“It was like being in hell because of the rain of fire coming from the sky,” Italian news agencies quoted local priest Giovanni Longo as saying.

He said it was not known if there were any hikers on the volcano at the time of the eruption, which caused fires around the village of Ginostra.

Italian media reported that some tourists had fled into the sea after the eruption, while others had barricaded themselves into homes. Stromboli is topped by an active volcano which is a magnet for tourists from early spring each year.

Italy's National Institute of Geophysics and Volcanology (INGV) said there were two huge explosions on the central-southern side of the volcano's crater at around 4:46 pm Wednesday, one of the biggest explosions ever recorded on the island.

The explosions were preceded by lava spills “from all the active mouths of the crater terrace,” the INGV said, prompting a two-kilometre high plume of smoke.

“It's been a long time since we had an eruption of this magnitude,” former local councillor Gianluca Giuffre told RAI news. “My experience and of those who have been living here for generations leads us to believe that the situation will calm down again but we must be cautious,” he said.

After the eruption French volcanologist Jacques-Marie Bardintzeff warned: “Zero risk doesn't exist. You have to be very cautious.” He called on hikers to exercise the upmost care on Stromboli, which is one of the most popular volcanoes in Europe among visitors. A firefighting plane could not put out fires in the area because of the amount of smoke, Italian media reported.

The INGV said it was monitoring the situation.

A previous massive eruption in December 2002 prompted a tidal wave after magma from a particularly violent eruption cascaded into the sea. Six people were injured. Piers, boats and some buildings were swept away.

Access to the island was forbidden to outsiders for over a month amid the risk of further landslides and scientists set up electronic observation stations to monitor volcanic activity.

Four-fifths of the island's population of around 500 decided to leave for the Aeolian island administrative centre of Lipari, whose schools have taken on Stromboli's children since the disaster. Stromboli was made famous in the 1950 film of the same name by Roberto Rossellini, starring Ingrid Bergman and is a major tourist attraction with thousands of people visiting its lava-spitting crater each year.

Stromboli is part of the seven-island Eolian Archipelago just off Sicily in southern Italy.