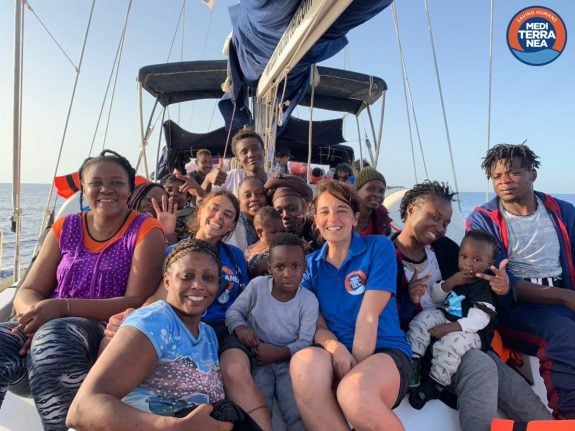 Rescued people and volunteers aboard the Alex, a sailboat operated by Italian charity Mediterranea. Photo: Mediterranea/Twitter

A sailboat belonging to Italian charity Mediterranea on Thursday rescued dozens of people including pregnant women and children off the Libyan coast, but Interior Minister Matteo Salvini vowed not to let them disembark.

“It was decided that Malta will transfer 55 migrants… on board the ship Alex onto a ship of the armed forces of Malta,” the Maltese government said in a statement.

In return, “Italy will take 55 [other] migrants from Malta [as] part of an initiative that promotes a European spirit of cooperation and good will between Malta and Italy,” it said.

Salvini lashed out at the boat operated by left-wing activists and carrying at least 11 women, three of them pregnant, and four children, as “disobedient, violent and pirate” if it did not head to Malta.

The Maltese coastguard vessel will pick up the rescued migrants from the 18-metre sailboat Alex, which is currently in international waters off Italy's Lampedusa island, after Salvini signed a decree forbidding them to approach.

Italian authorities on Lampedusa last week seized a vessel belonging to German aid group Sea Watch and arrested its captain for unauthorised entry to port with dozens of rescued migrants on board.

Despite Salvini's apparent firmness about closing Italian ports to migrants, at least 69 migrants and asylum seekers have arrived by boat in Lampedusa over the last 24 hours, Italian media reported, some rescued by Italian authorities.

On Friday, another German migrant rescue charity, Sea Eye, said its vessel Alan Kurdi had rescued 65 people from an overloaded rubber boat in international waters off the Libyan coast. The blue dinghy lacked sufficient drinking water for the 64 men and one woman, and there was no satellite phone or navigation aid on board, the group said in a statement.

Sea-Eye said its ship was trying to establish contact with Libyan authorities but had so far received no answer from Tripoli while “the rescue centres in Rome and Valletta are also silent”.

Another makeshift vessel carrying 86 people across the Mediterranean from Libya sank off the Tunisian coast on Wednesday, with all but three of them missing or dead.

The Italian judge in last week's Sea Watch case ruled that neither Libya nor Tunisia were safe countries for migrants.