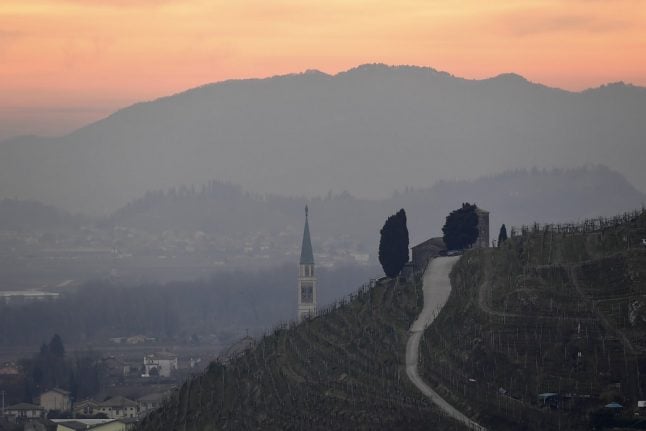 The Conegliano and Valdobbiadene hills, where the grapes that produce the famous Prosecco sparking wine are grown, got the green light at a meeting of Unesco's World Heritage Committee in Baku.

“The landscape is characterised by 'hogback' hills, ciglioni — small plots of vines on narrow grassy terraces — forests, small villages and farmland,” Unesco said in a statement announcing the decision.

“For centuries, this rugged terrain has been shaped and adapted by man. Since the 17th century, the use of ciglioni has created a particular chequerboard landscape consisting of rows of vines parallel and vertical to the slopes.” Italy has been lobbying to have the hills, which stretch for 30 kilometres, receive this recognition for a decade.

On Sunday the region became Italy's 55th World Heritage site, putting it level with China as the two countries with the world's highest number of Unesco honours.

The Prosecco sparkling white, which has the highest classification available to an Italian wine, is produced in a territory spread over nine provinces in Italy's north-east.

While the region spans over 500 towns in total, only 15 make Prosecco Superiore DOCG, the top-quality bubbly produced around the Venetian towns of Conegliano and Valdobbiadene, where complex geology is thought to make for a more diverse, flavourful taste.

As well as its ancient tradition of wine-making, the territory is known for its well-preserved early settlements.

Sales of Prosecco rose six percent in 2018 to 460 million bottles, of which 75 percent were exported.