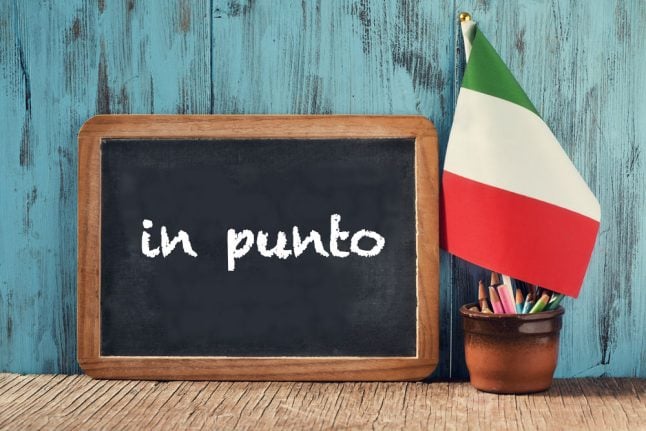 Italians are known for a somewhat relaxed attitude to time-keeping. But you never should generalize, as I was reminded the other day when a Pugliese friend and I were arranging to meet to catch a train: it soon became clear that my idea of being 'on time' was to get to the station the minute our train was due to leave, whereas she was worried about cutting it fine if we arrived just 10 minutes before.

In the end our train was on time and so were we (my friend's version of it, not mine).

Today's phrase will come in handy if you're more like her than me: in punto, 'on the dot'.

Punto means 'point' but also, as we've seen in the expression punto e basta, 'full stop' – or, to put it another way, 'dot'.

Imagine a clock hand reaching exactly the 'dot' of a given hour, and it's in punto.

Just like in English, it's especially useful when you're reminding someone else – perhaps, ahem, a chronically tardy friend – to be punctual.

Because you never know when Trenitalia will surprise you and show up 'on time' – in orario.

If that all comes naturally to you, you're probably someone who's puntuale – 'punctual' – whereas if you're like me and most of the time you feel like this:

… you're more likely in ritardo, 'late'.

But hey, as both Italians and Anglophones say, meglio tardi che mai – 'better late than never'.