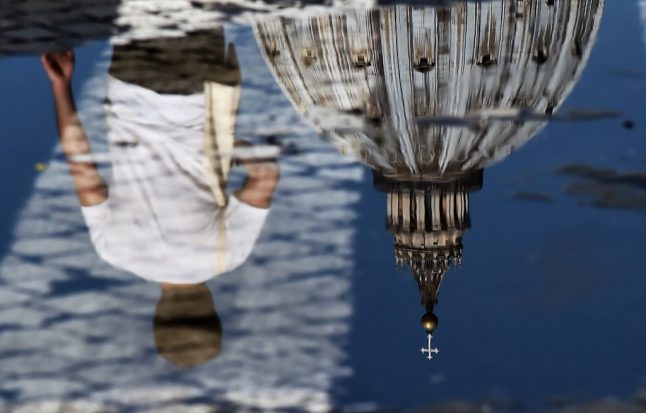 Storms that have been rolling in from the north-east since the weekend were set to reach the length of the country on Wednesday, with the Civil Protection Department issuing a yellow alert everywhere except the far north, Sardinia, Sicily and a pocket of the south-west coast.

A higher orange alert was in place in Tuscany, which has been battered by hail and heavy rain.

Strong winds on Tuesday sent beachgoers fleeing as gusts of up to 150 kilometres an hour buffeted the Adriatic coast and sun umbrellas and deck chairs went flying.

Flash floods, toppled trees and blackouts were reported in the central Marche region, where the gale blew a pedalo boat onto the beach in the town of Grottammare.

The storms are expected to move south throughout Wednesday, concentrating themselves over Puglia, Basilicata and Calabria by the evening before easing off.

While for some the downpours brought a welcome break from the sticky heat of recent weeks, temperatures remain high in the south and especially in Sicily, where the city of Syracuse was forecast to reach 43 degree C.

Several fires have broken out on the island as it bakes in extreme heat. On Tuesday night, some 750 people were evacuated from a tourist resort in Calampiso in the north-west as firefighters flew overhead dumping water on the flames.