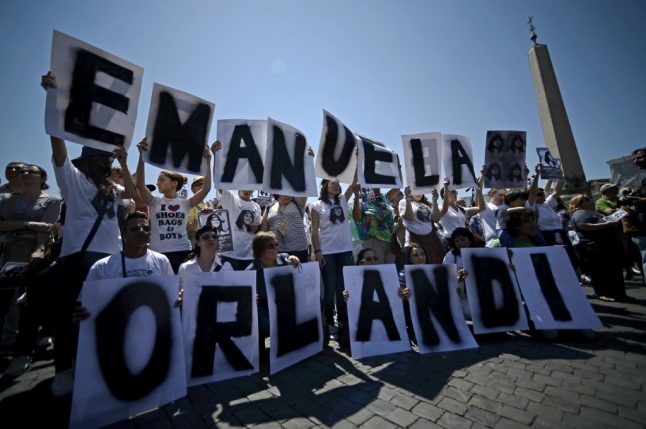 Emanuela Orlandi, the daughter of a Vatican employee, was last seen leaving a music class in Rome aged 15, and theories have circulated for decades about who took her and where her body might lie.

Two tombs at the Teutonic Cemetery in the Vatican were opened last week (see pic below) after an anonymous tip-off that they might contain her remains.

But in a surprise twist, not only was there no trace of Orlandi, the remains of two princesses believed to have been buried there were gone too. The Vatican immediately promised an inquiry, saying the bones may have been moved during work on the cemetery and Pontifical Teutonic College during the 1960s and 1970s.

This weekend it announced it had found two ossuaries placed under a trapdoor inside the college.

They will be opened Saturday by forensic scientists and in the presence of an expert appointed by the Orlandi family.

The latest development sent conspiracy theorists into overdrive again, with some smelling a cover-up by the Vatican.

However, he adds: “As long as people believe the Vatican has something to hide when it comes to two 19th century princesses, or a vanished girl, it's that much harder to believe 'All the Pope's Men' about something serious.

The Vatican's communications director Andrea Tornielli insisted the graves had been opened out of “Christian closeness to the Orlandi family” and “certainly not – as has been said – (in) an admission by the Vatican of a possible involvement in the concealment of a corpse”.

That was not enough to satisfy doubters however, particularly after Orlandi's brother Pietro, who has spent his adult life searching for his missing sibling, told media he had been warned hours before that the tombs would be empty. Orlandi urged the Vatican to question Francesca Chaouqui, a PR consultant who had worked in the tiny state and was mixed up in a separate scandal.

Chaouqui was convicted last year of leaking classified documents to journalists at the end of a highly embarrassing trial dubbed Vatileaks II.

She was defended by Laura Sgro, who is the Orlandi's family lawyer.

Orlandi told the Italian group Mediaset that Chaouqui called him the day before the tombs were opened to say they would be bare.

“In an effort to cushion the latest disappointment (in his search), I told Pietro the tombs would be found empty. This is my only statement on the matter,” Chaouqui wrote on Facebook on Friday.

“I am at the disposal of the Vatican judiciary… but I will not be able to add any details to them either, until I am released from the (code of) pontifical secrecy,” she added.

Those whose work with papal documents must vow to honour a confidentiality code known as the pontifical secrecy.

Breaking the code can lead to expulsion from the Roman Catholic Church.

The case has made the Vatican appear like a “house of mysteries” once more, despite Francis's attempts to make transparency a key-stone of his papacy,

“How is it possible the Vatican agreed to open the tomb… without knowing the names and surnames of those behind the tip-off?” he wrote Monday.

“Why did no one look properly into the request, before and not after the tombs were open, and verify the presence or otherwise of the princesses' remains?”

“Did the Orlandi family first, and the Vatican second, fall into a trap?” he asked.

The affair was also jumped on by critics of Pope Francis, accused by the far-right of being too liberal.

“It's chaos, there's a total lack of internal coordination,” the ultraconservative site Infovaticana said, slamming it a “grotesque episode”.