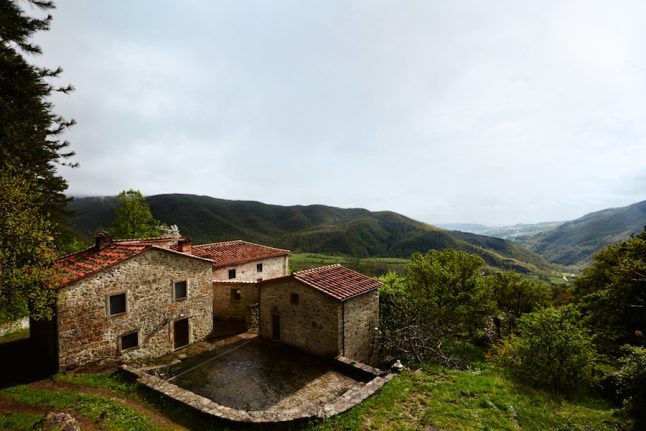 A view of the village of Giona and the valley below. Photo: Novanta

Slightly soggy and disoriented after a bumpy drive through the forest, we parked in front of the big ruin as instructed. And it was very big, and very ruined. Everything was still and silent except for the sound of the rain.

It had been raining non-stop for nearly two weeks at this point, and I wasn't sure our plan was such a good one. But we'd been waiting for weather to improve all month and it wasn't changing. And I'd spent far too long talking my Italian husband into what he thought was a fairly strange idea. And so, here we were, halfway up a mountain in Tuscany, looking for an abandoned village.

We'd made it through the forest, with no phone signal, with only the help of a few well-placed signs that reassured us at timely intervals that no, we weren't lost, we hadn't completely imagined this whole thing, and that we should definitely stay in first gear and we'd find the cocktails very soon. We walked the last little stretch, up past what looked like an ancient farmhouse festoned with fairy lights, with animal skulls and some kind of art installation out front. There was the faint smell of burning wood in the air.

This was definitely not your typical Tuscan retreat.

As the rain intensified, we ran the last stretch towards the main building and almost straight into Amy, our host, who was waiting for us. Moments later we were sat in front of a roaring fire in the kind of vast, open stone fireplace that city-dwelling types like us thought no longer existed, having a drink with Amy's parents (and dog).

They, like us, had timed their visit to coincide with a special food event here at Novanta. This unusual pop-up summer retreat, which was started by a small group of Dutch entrepreneurs and artists, hosts all kinds of special events here now in between hosting families and groups of friends looking for an off-grid and sustainable escape.

The story began when they stumbled across the abandoned mountain hamlet while travelling in the region, and eventually managed to wrangle permission from local authorities to host a summer retreat at the spot for 90 days – hence the name.

But people wanted to come back. And now, a few years on, and after lots of renovation work on the stone cottages here, Novanta is slowly becoming more permanent than pop-up.

Today it's grown to feature everything you'd expect to find at a Tuscan retreat, from an infinity pool with incredible views to a schedule of events including foodie and yoga retreats. But it still felt nothing like your average Tuscan holiday villa. A pizza ready for the oven at 'Geronimo Pizza'. Photo: Clare Speak/The Local

The whole village has an atmosphere that's less “homely” and more like, well, just being at home with your family – that is, if your family were all skilled artists and chefs, who roast wild venison on an open fire, and have a box of newly-hatched ducklings chirping away in the corner of the living room.

Who would build a village in such a remote location in the first place? As far as anyone knows, the hamlet of Gello was once on the ancient pilgrims' trail, leading through these wild forests towards La Verna. You can still follow the trail to reach it in around an hour from Novanta.

I'd never imagined a place so wild, unspoilt and atmospheric existed so close to my concrete apartment block in Arezzo.

The unseasonably bad weather forced us to abandon the treehouse idea, but luckily there was a room free for us – in that very same little “farmhouse” I'd seen earlier – the one with the fairy liights and animal skull and smell of wood smoke, which it turned out was coming from a pizza oven, already lit to reach the right temperature for the next day, built into the thick stone wall.

There's no gloss here, and no five-star luxuries. Instead, there are real luxuries: good food, silence, fresh air, and time. There's no rustic “styling” going on here – it just really is rustic. But it's also very artfully done, with vintage furniture handpicked and restored by artists, and one-of-a-kind art installations created on site.

One of the rooms inside a refurnished cottage at Novanta. Photo: Novanta

The next day, we got a lesson about life in this remote location. We braved the rain and walked up the mountain track to meet Fabrizio, the by-now legendary local butcher who'd been mentioned by every person I'd spoken to since arriving.

He'd moved here from the very north of Italy, and lived in his remote, sprawling stone farmhouse with his family for years before the Novanta project existed, farming pigs, hunting wild boar, butchering his own meat, and creating his own salumeria.

He clearly loved his work, and quietly, proudly, showed our excitable and incredulous group how he and his family ran the whole farm themselves, up here, almost an hour's drive from the nearest town.

He'd hurt his arm, and explained how a knife had slipped while he was butchering a pig. His wife Meri had driven him, bleeding profusely, down the mountain and left him with a friend. While he was driven to hospital, she rushed back to finish butchering the pig herself.

At Novanta, too, you can see that the focus on sustainability and conserving precious resources is not just “the right thing to do” but vitally important when you live in a remote location like this.

But we didn't exactly feel cut off. Our electicity flicked on and off a few times, but that and the lack of wifi barely even registered.

The thing I do remember clearly was waking up in the stone cottage in the early hours of the morning, after hearing an animal moving around in the trees outside the open window. I lay awake listening to the nocturnal sounds of the forest and the soft rain, watching as the outlines of the stone walls slowly emerged from the pitch blackness in the first morning light.

I didn't feel the need to ask why Amy, Fabrizio, and all the others who'd arrived here from so far away had fallen so madly in love with this area and decided to stick around. It was pretty obvious.

This really is the Tuscany everyone dreams of – including some of us who already live in the region.

And every one of the other guests I spoke to, over a breakfast of still-warm homemade bread, jam, and just-picked fruit, said they'd either been there before or would be coming back. I know I will be, too.